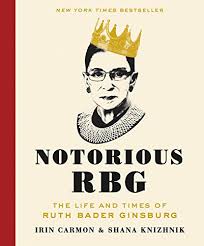 Ruth Bader Ginsburg has passed. I pray for her. I really do. Not just in that virtue signaling way Catholics do. It’s hard not to think of all the vitriol  leveled at Antonin Scalia when he passed and now pat oneself on the back when posting on Facebook that you are praying for RBG’s soul.

Hell scares the hell out of me. I wish that on no-one. Moreover, I know it gives God no pleasure to see a soul turn away from Him. So I pray.

Also, in yet another example of life isn’t all that it’s made out to be. Here you have the case of RBG. Few people have been so lionized in their lives. Books were written about her. Movies were made. Graffitti proclaimed her awesomeness. The media extolled her.

And now that she’s gone there will be a few days of remembrance. But let’s be honest. Most have already moved on. There’s a battle brewing. 2020. There’s a battle for the court going on right now. All those who lionized RBG have moved on to demonize whoever Trump nominates. They move on.

Fame is fleeting. So many seek it but in the end it’s useless. Meaningless. Jesus is the way, the truth, the life. People will forget about you. They live their own lives. Their idolization of RBG was never about the person. It was always about what she represented and what she could do for them, namely keep abortion legal. They propped her up because she gave them what they wanted. If she had converted on that issue, they would’ve hated her. Their adulation was always meaningless. It was a bargain.

A bargain that may have had a terrible cost. I pray for her.

Say a prayer and then consider the moment. It has been clarified. This is a crossroads. The fate and future of our country can be changed.

And I know that the spines of Senators Murkowski, Romney, and Collins all just turned into jell-o. That’s a problem because they have the ability to be the ones who stand in the way of Trump nominating someone to the court.

Sadly, we find ourselves in a time when Mitt Romney may decide the future of the court and the Supreme Court may just decide the election. A court with just eight justices. Think about that for a second. We could have a contested election that goes all the way to the Supreme Court and the court only has eight justices. With Roberts doing his Roberts thing, you could easily see the court splitting 4-4. That, my friends, is nightmare fuel.

And even more reason to pray.