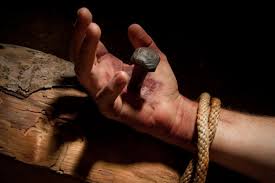 This is pretty amazing.

There’s a lot here so I’ll sum up.

Thirty years ago, archeologists believed that they found Caiaphas’ tomb. A big deal. It’s always good to have archaeological back-up of the Bible, if only to help people struggling to believe.  Sometimes,  hearing that this stuff actually happened helps.

For years, many posited that crucifixion wasn’t real.  They said. it wasn[‘t actually done. And then in 1968 bone fragments were found and blew that out of the water. But let’s focus on this story here.

The ancient nails found in Caiphas’ ossuary had fragments of bone and wood embedded in them.

But at some point in the 1990’s, the nails went missing. Many years later a filmmaker named Simcha Jacobovici claimed to have the nails. Few believed him. He even said that they were nails from Jesus’ crucifixion in a documentary he made.

But now an explosive new study has concluded that the nails are indeed the same ones – and that they were probably used to crucify someone too.

He said: ‘The materials invading caves differ subtly from cave to cave depending on topography, soil composition in the area, the microclimate and neighbouring vegetation.

‘The physical and chemical properties of the materials which, over centuries, have invaded the tomb and its ossuaries were investigated.

‘Our analysis clearly and unequivocally demonstrates that these materials are chemically and physically identical to those which have, over centuries, also become attached to the nails.

So, of course, nothing is known for sure but it looks like they found Caiphas’ tomb and it looks like there were two nails in there with him that. certainly seem to have been used in a crucifixion.