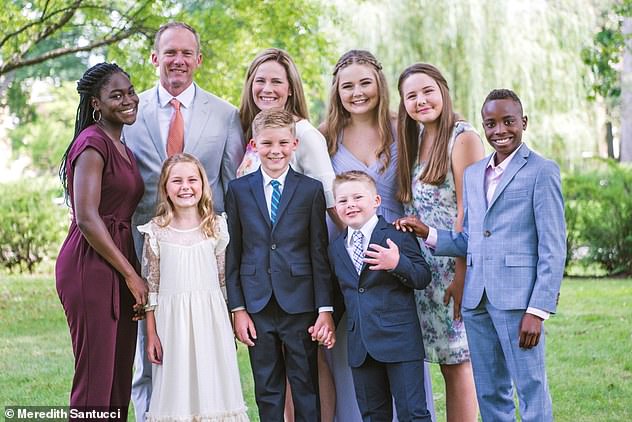 We’ve seen some pretty outrageous accusations leveled at the mother of seven. First ACB was accused of being a whilte colonizer for adopting black children. Now, she’s accused of perhaps supporting killing because she’s so dedicated to life. Wait, what?

I’m not going to link to Vanity Fair because you shouldn’t reward asshattery with links so I’ll link to Townhall.

Senator Sheldon Whitehouse (D-RI) proposed a question to ACB which read, “Under an originalist theory of interpretation, would there be any constitutional problem with a state making abortion a capital crime, thus subjecting women who get abortions to the death penalty?”

By far, the stupidest question ever asked by a Senator not named Dianne Feinstein.

But, ACB responded in the way she responded to any question about how she would rule on any case. She smartly responded, “Please keep your imaginary bullshit outta’ my face. I got tons of real world stuff to deal with. Ok, Sheldon?”

OK. That’s not actually what she wrote but I’m paraphrasing. She actually said, “As a sitting judge and as a judicial nominee, it would not be appropriate for me to offer an opinion on abstract legal issues or hypotheticals.”

This is exactly what pretty much every judicial nominee not named Bork has said to such questions. Hey, how’d that go for him, anyway?

“Obviously, claiming that she can’t answer hypothetical questions has been Barrett’s schtick throughout this entire process and, in some instances, it might actually be appropriate to say as much,” Levin complained. “But not when the question is ‘can a state sentence a woman to death for getting an abortion,’ unless of course she thinks there might somehow be a scenario in which the answer is yes!”

“Barrett is expected to be confirmed for a lifetime appointment to the highest court in the land,” Levin warned, “barring something crazy happening like ‘moderate’ Republicans thinking maybe women shouldn’t be executed for choosing what to do with their own bodies.”

It’s just that when I’m interested to read about how “Adele Blew Right Past Weight Loss to Host a Winning Saturday Night Live” I might think to go to Vanity Fair but when I want to read about…weightier issues I might look elsewhere.

Think about what a messed up worldview you have, when this is the face of evil: