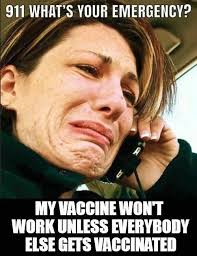 Ah, so it won’t be a federal vaccination mandate. How this is working is that the federal government has announced that private companies can refuse you employment or fire you if you refuse the vaccination.

So it’ll be a middle man.  Hey, it’s not the government mandating you stick poison in your  arm.  It’s just the government saying that private businesses can (and should.)

As health care workers and the elderly began receiving the long-awaited COVID-19 vaccine this week, the Equal Employment Opportunity Commission released updated guidelines clarifying that employers can require the vaccination when it becomes widely available in most cases.

The EEOC, which enforces employment laws like the Americans with Disabilities Act, said Wednesday that a vaccination does not constitute a “medical examination,” which employers are barred from forcing.

Because of this, employers can require workers to get the vaccine, except in specific instances, such as a worker who has a religious belief that prevents them from getting a vaccine.

You can rest easy now.  It’s not 1984. You only have to get vaccinated if you want to work, eat, or go out in public. And you thought you’d be forced to get the vaccination. Silly conspiracy theorist.