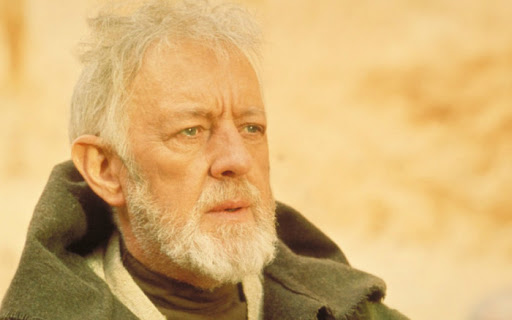 Sir Alec Guinness is recognized  as one of the greatest  actors of  the 20th c century. Known for many  classics  such  as Bridge on the River Kwai to his iconic role  of Obi Wan Kenobi  in Star Wars, Guiness  took on a far larger  role  when he became  Catholic in  the 1950’s.

The instigating moment for  this is  so telling and sad when one  looks back that I thought I’d share.

He was in France working on the film Father Brown, based on G. K. Chesterton’s well known fictional crime-solving priest. He was playing the title role and so was dressed up as a Catholic priest. While walking down the street in priestly attire, a local child spotted him and mistook him to be a genuine Catholic priest. The child ran up, grabbed his hand trustingly, and walked with him down the road.

The trust and affection the child had for Catholic priests had a deep impact on him and made him start to seriously consider Catholicism. He later explained:

“Continuing my walk, I reflected that a Church that could inspire such confidence in a child, making priests, even when unknown, so easily approachable, could not be as scheming or as creepy as so often made out. I began to shake off my long-taught, long-absorbed prejudices.”

Sadly, that confidence was abused by many clergy and  then tragically  covered  up for decades. I  don’t   bring this up  to be a downer. We are all  painfully aware of what happened.

It’s just when we try to figure out the  state of the world, we must realize  that  this played and plays a  massive role. When we see that young people have rejected the Church,  we  must realize that this abuse and conspiracy of silence by the clergy is all they’ve known of the Church. It’s all they’ve seen in the media. Priests are a punchline for  every comedian. They are seen as sources of suspicion and  malevolence.

Every priest  carries   that baggage with them,   regardless  of  their innocence. It  is a weight upon the  Church. The  horror of that damnable conspiracy will not just lead  the  souls  of those immediately impacted  astray, but entire generations who grow up without trust of  the clergy will  be impacted too as  they look elsewhere for spiritual fulfillment.

Pray  for the clergy.  Pray for the Church. Pray for  the souls of the lost.