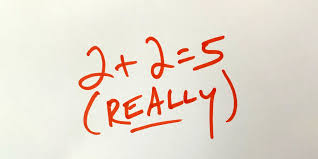 Look, I’ve been all set to get dragged off to some hellscape camp or dank prison for some time. I’ve been prepared for it to be on charges of “Illegally promoting Christianity” or “anti-abortion  activities.” Those are charges I can be proud of. But I just know that in the end I’ll be dragged off for something like “Pronoun problems” because I refuse to call Dr. Rachel Levine, our new assistant health secretary, a woman. Or something equally as silly. I’ll try  to make friends with the guy who’s in for “Refusing to bake a cake.”

I’d worry about the Antifa gang in the prison but thank goodness, they don’t actually get sent to prison.

I wonder what’ll happen  when they ask me what I’m in for and I  have to try to look cool and say, “Pronoun problems.”

This absolutely reminds me of the infamous phrase ” two plus two equals five ” (2 + 2 = 5) in the dystopian novel Nineteen Eighty-Four, by George Orwell, which was as a dogmatic statement of like the slogan “War is Peace”, which the Party expects the citizens of Oceania to believe is true.

Or worse yet, they don’t expect you to believe it’s true, they just want you to say it. That’s the best way to show fealty to the state, by saying something obviously untrue. Y’know like, “It’s not a human, it’s a blob of tissue” or “There was no fraud in the 2020 election” or “gender is a choice.”