If Biden is Devout, You’re an Extremist 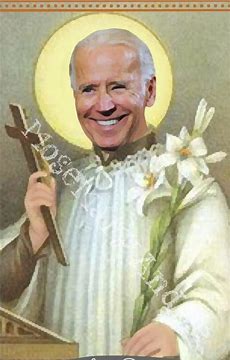 Archbishop Joseph F. Naumann, 71, recently told Catholic World Report that President Joe Biden “should stop defining himself as a devout Catholic, and acknowledge that his view on abortion is contrary to Catholic moral teaching.”

And as long as the media can promote Biden as a devout Catholic and portray faithful Catholics who stand against abortion or say there are only two genders as dangerous radical outliers. They can be set apart from a more inclusive Catholicism. Once faithful Catholics can be demonized, then they can be silenced with the help of their friends in Big Tech.

As Abp. Naumann correctly points out the bishops have a responsibility to publicly correct Biden. However, the vast majority of them don’t. Whether they like what he’s saying and doing or they refuse to act through plain cowardice, hardly matters. It has the same effect.

The argument brought into online media is progressives insisting that God loves everyone as if that were a point of contention. That’s where they want to play this game. They want their side to be the side of love and inclusivity while we will always be defined in the media as strident or traditional, both of which are bad words to modern elite.

They point and demonize. That’s what they do. Why? Because it’s worked for them. And they will continue doing so. They point, demonize, and then silence.

This is why blogging and podcasts and radio are so important right now. We must find avenues where we are not at their mercy. We will be discussing more about how to do this in the near future. Stay tuned…