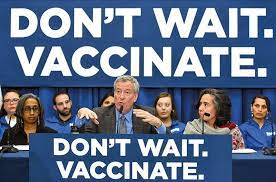 I hope we all see that refusing the vaccine will be seen as an act of violence because, according to them, your careless obstinance may harm or perhaps kill others.

Their decision to take the jab is altruistic, you see. Your refusal reveals you to be a careless brute who doesn’t care about anyone’s parents and grandparents because we’ve been told that asymptomatic contagion is very real. Once again, your refusal is violence.

And violence must eventually be met with violence. You will be blocked from flying and perhaps from working or shopping. And the government will say it’s not mandatory because these are private businesses making these decisions not to employ you or sell to you.

And when it occurs, who will stand up for those refusing the vaccine? The media? Judges? The government? The churches?

Don’t fool yourselves. None of them will. Most of them will shrug silently and think you brought this on yourself. This is coming.