Nobody Expects the Atheist Inquisition!!! 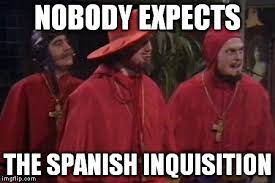 This is just priceless. I don’t know how to explain the sound of my schadenfreudian giggle but believe me it’s happening right now.

Sometimes, atheists can be downright religious. On Monday, the American Humanist Association (AHA), which advocates for a “nontheistic worldview,” turned on one of the most prominent atheists in the world, Richard Dawkins. The AHA rescinded an award it gave Dawkins back in 1996, apparently for the heresy of raising questions about transgender identity.

The AHA awarded Dawkins the Humanist of the Year Award in 1996, recognizing the atheist evolutionary biologist as “an exemplar of humanist values.” AHA cited the “communication of scientific concepts to the public” as a vital part of giving that award to Dawkins, who had published the influential atheist book The Blind Watchmaker in 1986. (He would go on to publish The God Delusion, helping to lead the New Atheist movement in 2006.)

Yet AHA announced that Dawkins had betrayed the organization’s values.

“Regrettably, Richard Dawkins has over the past several years accumulated a history of making statements that use the guise of scientific discourse to demean marginalized groups, an approach antithetical to humanist values,” the AHA board wrote in an announcement on Monday.

“His latest statement implies that the identities of transgender individuals are fraudulent, while also simultaneously attacking Black identity as one that can be assumed when convenient. His subsequent attempts at clarification are inadequate and convey neither sensitivity nor sincerity,” the board declared.

“Consequently, the AHA Board has concluded that Richard Dawkins is no longer deserving of being honored by the AHA, and has voted to withdraw, effective immediately, the 1996 Humanist of the Year award,” the board concluded.

A little too much truth for the “my feelings are the new facts” crowd. All the nones that Dawkins helped to create are turning on him.

I’ll admit that I think this is hilarious but maybe this shunning could lead Dawkins to rethink everything. Maybe it could lead him to Christ. Wouldn’t that be kind of awesome?