Is the CDC, Media, and Fauci Sudden Turnaround a Conspiracy? 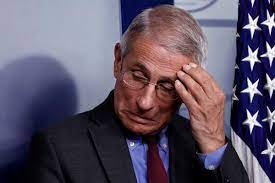 Recent stunning admissions from the White House, the CDC, Dr. Anthony Fauci, and the media concerning the origins of the Covid-19 virus have left many wondering why the sudden shift?

For the past year, Dr. Fauci has publicly dismissed the very notion that the Covid-19 virus which has taken millions of lives worldwide was created in a lab in Wuhan. The very notion was scoffed at in the media and saw Big Tech firms like Facebook and Twitter banning users for even questioning it. The popular website Zero Hedge was suspended from Twitter for suggesting such a thing in a well researched piece.

The media frequently labeled promoters of the idea as racist and accused them of trying to foment hatred against Asians. In fact, a great deal of the violence against Asian-Americans in this country was blamed on right wing rhetoric.

But just two weeks ago a massive change occurred. Suddenly, Dr. Fauci admitted that the deadly virus may have originated in a lab. The media ran headlines like this one from The Politico: “Facebook no longer treating ‘man-made’ Covid as a crackpot idea.”

The very notion went from crackpot to mainstream seemingly overnight.

Buzzfeed News put in a Freedom of Information Act and was scheduled to receive 3,200 pages of emails to and from Dr. Fauci, which they published on June 1. The White House and Fauci clearly had known this was coming and clearly knew what those emails contained. In the emails, Fauci said that masks which he publicly told people to wear are ‘not really effective,’ he advocated for school closures, and he’d been told by a reputable scientist that the virus could have been ‘engineered’ which he then denied for an entire year.

Conservative commentator Steve Deace suggested on Twitter, “If you were wondering why we suddenly went through last week’s media-Covidstan-industrial complex retconning on the origins of the Wuhan virus, now you know why. They had to get ahead of #FauciLeaks.”

I don’t believe in coincidences. They’ve been dealing with this FOIA request for weeks. They knew they were about to be exposed. So what did they do. They coordinated a campaign to change everything. They said the virus may have been engineered in a Wuhan lab. The CDC’s guidance on masks changed overnight.

It is interesting to note that the sudden turnaround in perspective accompanied no scientific breakthrough. No scientific advancement occurred they could point too. There was no unearthed information that suddenly made the belief that a lab in Wuhan may have engineered the virus which escaped and killed millions instantly more plausible.

The turnaround looks like damage control. The Potomac Two Step. It is the move of a politician, not a scientist.

Think about this for a moment. If we had known that the virus may have been engineered in a lab rather than a product of natural evolution, might that have sped the process of coming up with a treatment or a vaccine? It’s difficult to know but certainly it would seem that covering up inconvenient information such as the fact that Fauci himself pushed through the funding for the Wuhan lab to perform gain of function research of the coronavirus may very well have cost lives. If covering up that information took precedence over offering all the information available, which now seems at least plausible, this should change the entire landscape of Covid. This could make people question everything.

It may very well be that the man we put in charge of fighting the virus had the most to lose from the truth of it coming out.