Beautiful Image of Sacred Heart of Jesus Carved Into Walls of Auschwitz by Prisoner with his Fingernails. 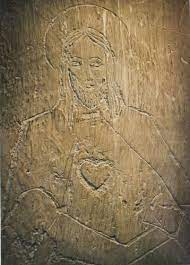 Wow. This is amazing.

The Sisters of Life tell the story:

“If you travel today to Auschwitz I, a World War II Nazi German concentration camp, you’ll discover that every prison cell has a story — a terrible and largely untold story of human suffering. In Block 11, however, you’ll find two prison cells of unusual legacy. One is where St. Maximilian Kolbe gave his life in place of another man. The other, less known, is the cell in which Lt. Stefan Jasienski awaited execution after a failed espionage attempt. Upon the walls of this dark, bleak chamber, you’ll find Jasienski’s masterpiece: an image of the Sacred Heart of Jesus, which he carved with his fingernail into the stone.

When everything else seemed lost, Jasienski clung to this heart, the heart that had suffered, died, and rose for him, the heart that gave hope and purpose to his own. The Heart of Christ reveals to us our identity and our destiny. Our hearts are created to be places of light and truth, places where God dwells. Because of this, we are never alone.”

Lt. Stefan Jasienski died in Auschwitz in January of 1945. It took 21 years before the inscription was discovered but serves as a beautiful reminder that Christ is always with us, even in our darkest moments.

(I can’t believe I didn’t know about this before.)

HT I originally saw this on Brad Bourgeois’ Facebook page.