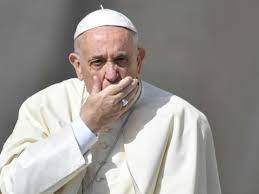 I love when the media unironically refers to American bishops as “the deeply conservative American bishops conference.” If you required even more evidence that the news media was more interested in narrative than truth, this is it.

Well, there’s that and the definition of President Joe Biden as the “devout Catholic” or “Deeply Catholic.” But let’s be honest, you don’t need any more evidence of the media’s bias and ignorance of the Church. They are so DEEPLY ignorant of the Church’s actual teachings so they fill in what they don’t know with unequal measures of ignorance, vitriol, hatred, and bias.

How the media sees the Church:

How the Church actually is?

On Friday, the U.S. Conference of Catholic Bishops voted by a large majority (despite a loud and whining minority) to begin drafting guidance on the sacrament of the Eucharist. That guidance could (but won’t) lead to a recommendation that priest could deny communion to prominent Catholics like Biden who support abortion rights. (Spoiler alert: THEY ALREADY CAN AND SHOULD.)

Just imagine for a moment a deeply Catholic politician who endorsed legalized slavery. You think the bishops would pause before denying that politician Communion? Of course not. Nor should they. For the sake of that politician’s soul as well as to avoid confusing other Mass goers about what the Church teaches, they should not be offered the eucharist. But the issue of killing tiny human beings is a little less clear, at least for some.

I have no idea why but it is.

So, as the US bishops crawl meekly toward a common sense consensus, the media is rooting for the Vatican to stomp down on those deeply racist and homophobic icky right wing bishops.

The NY Times wrote this morning:

But the public silence at the Vatican Saturday, the officials said, also reflected that the pope and his top officials remained confident that the American conservatives would never actually pass such a doctrinal declaration on banning communion.

Church law says for that to happen, the bishops’ conference would need either unanimous support, which is essentially impossible, or two-thirds support and the Vatican’s approval.

“It’s not going to get to that point,” said one senior Vatican official with knowledge of the thinking inside the Congregation for the Doctrine of the Faith, the church’s doctrinal watchdog. “It’s inconceivable.”

Biden, when asked about the vote yesterday, had a similar view.

“That’s a private matter,” he told reporters. “And I don’t think that’s going to happen.”

Ha! I love that. They’re talking about an issue going on in the Church and they speak to…Joe Biden to prognosticate. Say, what happened to separation of church and state, NY Times?

Interesting to note that for decades, more liberal Church follows bemoaned the top down approach of the Catholic Church. They talked all the time about how WE are the Church and the Church needs to decentralize. But all of a sudden, they’re all about calling the Vatican to stomp out these bishops seeking to uphold Church teaching on this minor issue some call…the killing of actual human beings!!!!!

I pray that the Church will uphold the sanctity of life. Every moment the American Church waffles on this all important issue confuses and offends the faithful.