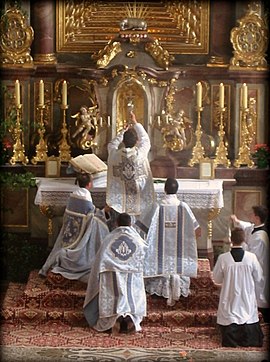 How many times have you see headlines like this one, “Why some younger evangelicals are leaving the faith.” Dozens? Hundreds? It’s the easiest religion story to write. It attacks all the right people and all you need is a few “experts” to point to declining numbers among young Christians.

This is a legit story. But it tells only one side of the story.

Have you seen headlines in any mainstream media about the number of young people attending the Latin Mass? I haven’t. But it’s happening.

Anecdotally, I’ve witnessed it myself at St. Mary’s in Conshohocken. The church is packed with young families. Packed. And if you go anywhere in Catholic social media you see that the same is true all over the country,.

So where is that story?

It’s not a story because it doesn’t fit the narrative. And the narrative is that Christianity is dying and it is being abandoned. Any movement of young people flocking towards “old time religion” must be either ignored or demonized.

Would you argue that there’s any group in Catholic-dom that is more reviled than trads? “They’re intolerant. They’re abrasive. They think they’re better than everyone else.” You hear that all the time but couldn’t you pick any group and find some evidence of that? Isn’t that merely accusing them of being human?

I see this all the time online. Some rando says something nasty on Twitter and suddenly that’s indicative of all trads. They are either ignored or reviled.

Pope Francis is coming out with a document about the Latin Mass. Something tells me that being ignored would be better than what’s about to come.

FYI, I’m not a traditionalist. I’m…trad-adjacent.

My first foray into the TLM went…um…pretty bad. You can watch it here.