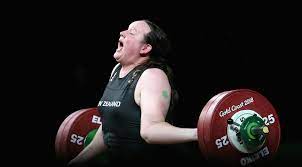 So here the journalists have these three female athletes who won gold, silver, and bronze in weightlifting. The gold medal winner actually broke the world record. But what does the media have to ask about? Not about their achievements as female athletes but about some dude who pretended to be a lady and got knocked out in the first round.

That’s the thing. The media pretends to celebrate female athletes but actually they just care about politics. The silence from these three women is very telling. This guy asks the question about the historic nature of a trans athlete competing and he gets head walloped with silence. Awkward silence that drags on. Finally, the American lifter who won bronze just says, “no, thank you.”

That’s a very telling “no, thank you” isn’t it?

Here’s the thing. The media is pushing this. Not the athletes. Not regular people. The media and some nuts on Twitter. That’s it. And people are too frightened to speak out against them. I’m happy that these three women didn’t join in the Amen chorus on praising this mentally diseased man who is seeking to destroy female sports.

I think it’s a big moment.