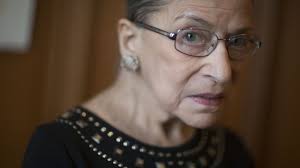 So here’s the deal. There’s a famous quote by Ginsburg advocating abortion. But her quote didn’t age well because she dared to mention “women.” I guess RBG ain’t SJW enough.

With Justice Ruth Bader Ginsburg’s death, we lost a champion for abortion and gender equality. And on the anniversary of her death, the fight to protect abortion access is more urgent than ever. pic.twitter.com/vIKadIHouN

Notice the term that’s missing? Women. That’s right. The ACLU redacted “women” and somehow that’s more feminist. This is obviously because they’re all in on the fallacy that men can become pregnant because…um…

They’re celebrating one of the great leftist women by changing her quote. Sounds like mansplaining to me.

Megyn Kelly called it out, according to The Daily Caller.

“Today the ACLU decided to celebrate, not celebrate, but commemorate the one-year mark of Ruth Bader Ginsburg’s death by retweeting a famous quote of her’s about a woman’s ‘right to choose,’” Kelly shared Thursday during her SiriusXM radio show “The Megyn Kelly Show.”

“The ACLU is also pro-choice like Bader Ginsburg was, rather than just posting her original quote… they changed her words to ‘the decision whether or not to bear a child is central to a [person’s] life in brackets, to [their] well-being and dignity in brackets, when the government controls that decision for [people], [they are] being treated as less than a fully adult human.”

The language which the left so vociferously attempts to change is their own downfall. As words are expanded into meaninglessness they will be unable to communicate. This is the Tower of Babel. The left will be left eternally correcting each other’s language. Eventually, they will just be left with emotionally packed grunts, whines, and groans.