College Dems Eating Their Own in the Most Epic and Hilarious Way. DNC Runs!!! 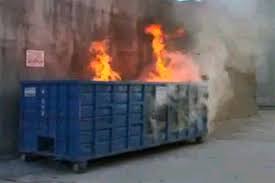 Well, it’s official. Republicans on college campuses are so scarce that the College Democrats are now forced to resort to eating their own with deliciously outlandish accusations of Islamaphobia, anti-semitism and pretty much every awful slur they used to tag on College Republicans.

This is sorta’ fun though in a post apocalyptic pass the popcorn way.

The College Democrats are essentially doing this.

And this is all from The Politico too so you know it must be bad if it’s getting any coverage at all.

“The kids are not alright.

The College Democrats of America — the Democratic Party’s national organization presiding over 500 chapters on campuses across the country — is in turmoil.

The group’s leaders are publicly firing off accusations of anti-Blackness, Islamaphobia and anti-Semitism at each other. Impeachment proceedings are now in the works against the organization’s new vice president, Nourhan Mesbah, who is Muslim. College Democrats say that screenshots of tweets that their peers sent in adolescence spread rapidly through group texts, which already caused a student running for president of the group to withdraw their candidacy in September. And national advocacy groups for Muslim and Jewish Americans are now weighing in with criticism.

The conflict has gotten so messy that the Democratic National Committee is considering disaffiliating with the national collegiate organization altogether and creating a partnership with the state groups underneath the national umbrella, according to a Democrat familiar with the discussions. The DNC declined to comment.

I love how the grown up Democrats are running from this dumpster fire even though they do the same exact things every single day. This reminds me of the final scene in Lord of the Flies when the kids are all war painted up and fighting a brutal war against one another and who comes to save them but a military ship. The point being that the grownups are doing the same things as the kids. And in this case it’s completely true.

The kids have learned from their superiors. The problem is that grown up Democrats have Republicans to smear. College Democrats don’t actually have any opposition on campus so they must eat their own.

I love this next snippet from The Politico:

The clashes over religious bigotry and race within the College Democrats of America (CDA) reflect, to a degree, larger debates happening throughout politics. But the next generation seems poised to escalate them further. Some CDA members argue that the internal frictions constitute a turbulent but morally necessary reckoning with systemic racism. Other Democratic officials see it as a bunch of college-educated, hyper-woke kids trying to play politics in a way that’s off-putting to many voters.

“They are caught up in their own drama and playing ‘Boys State’ government,” said the same Democrat. “They think they’re the hottest s— on Earth.”

This all started when a young man named Tasneem Ahmad Al-Michael, a Muslim and former vice president of the CDA, abruptly ended his presidential campaign because someone uncovered a 2014 tweet in which he used a racial slur.

Introduce Nourhan Mesbah, who had been serving as the CDA’s director of Inclusion, Diversity, Equity, and Access (IDEA). This was her big moment. She wanted to be Vice President. She grabbed it. It was hers for the taking.

And all seemed well right up until the day before the election, when the CDA’s Jewish Caucus shared a screenshot of a 2016 tweet Mesbah wrote while watching the Hillary/Trump debate.

Mesbah, who was 13 at the time wrote, “I blame this debate on the yahood.”

Gee, one might get the idea from this that the Democrat Party was a seething cauldron of racism and anti-semitism, huh? Thank goodness that’s not true.

But anyway, Mesbah still narrowly won the College Democrats’ vice presidential race. But this ugliness was still out there so she consulted with the DNC on a statement which said exactly what you think it would say. It said, “I apologize for my words in 2016. My comment was in no way rooted in malice or anti-semitism, especially as a 13-year old, relatively new immigrant from North Africa, with a different regional dialectic linguist comprehension.”

So kinda her fault but kind of a misunderstanding. But then she added, that, “while I take responsibility for my actions, I am hurt by the Islamophobia and xenophobia that continues to unfold.”

She makes an anti-semitic statement and people point that out and that makes them Anti-Muslim. Ah, the wokeness is strong with this young Paduan.

So in response, the CDA board censured Mesbah and required her to “undergo training about antisemitism and cultural sensitivity from the Anti-Defamation League, the American Jewish Committee, or the U.S. Holocaust Memorial Museum.”

Guess what. She didn’t do it. Rules aren’t for the powerful, silly.

Last week, Mesbah’s successor as IDEA director, Jeremy Ward, called for Mesbah to resign as vice president “due to the harm caused to two different communities.”

He also threw in for good measure that Mesbah was a racist. Wait. What? Where did that one come from? Nobody really knows. He just said that Mesbah exhibited “a pattern of discrimination against members of the black community, specifically black women.”

To be clear, he didn’t actually disclose even one specific instance of “anti-blackness” behavior. Ah, I see the student has become the master.

I don’t know why the adult Dems are running from these kids. It seems to me they’re learning just fine how the game is played.

Now, several college Democrats joined together to call for Mesbah’s resignation because she’s anti-semitic and now it turns out anti-black.

In an interview with POLITICO, Mesbah said she had been “held to a double standard solely because of the way I look, the faith that I practice.” As evidence of that, she also said a member of the college Democrats called her a “terrorist supporter” but she declined to name the person.

Ah, the unnamed attacker. I love this tactic. Just make up the worst thing you could say about yourself, put it in the mouth of a supporter of your opponent, and then refuse to name them because you’re above all that. I love it!!!!

“Everything I say is torn to shreds,” she added. “I can’t just make a tweet about pop culture without it being ripped apart for underlying messages and hidden meanings.”

I know. She can’t even call Jews derogatory names anymore without people freaking out, amiright?

But it all gets better from here. The Council on American-Islamic Relations, the largest Muslim civil liberties organization in the country, has now jumped into the maelstrom of hatred, power lust, and envy called the CDA to probe accusations of “rampant anti-Muslim bigotry” inside the organization and backing Mesbah.

But this does raise an interesting question for the media. Normally when CAIR accuses a group of Islamophobia that’s enough for the mainstream media to run with but something tells me they’ll be a little slower to pull the trigger on this one.

Matt Nowling, the former interim president of the College Democrats, had the best quote at the end of the Politico article. he said, “The college Democrats is a pipeline to the Democratic Party and the broader progressive movement.”

On that, we can agree perfectly. No truer words were ever spoken. This younger generations seems to have learned very well how to play the political game. Have fun tearing at one another over the shreds and tatters of this once great country.