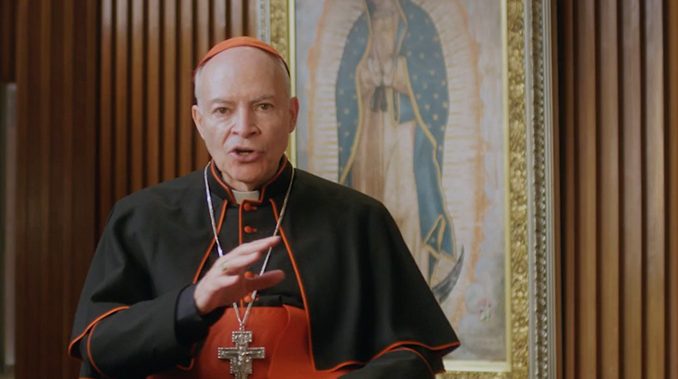 Catholic priests convicted for standing up for life and the teachings of the Church. I think there are many priests that would not be convicted of such a thing. That is sad to say but it is sadly true.

Catholic World Report:
Two Mexican cardinals, a bishop, and three priests have been convicted of constitutional violations for warning the public against the ruling party’s opposition to the values of human life and family, their advocacy of the LGBT agenda, and their promotion of socialism.

The convictions have caused alarm in Mexico regarding their implications for freedom of speech and the right to criticize the socialist ruling party “Morena,” which is accused of undermining Mexican civil liberties.

Among the convicted were the Cardinal Archbishop of Mexico City, Carlos Aguiar Retes, and the former archbishop of Guadalajara, Cardinal Juan Sandoval Íñiguez. The decision was handed down on November 18 by Mexico’s national Electoral Tribunal in response to a lawsuit filed by Mexico’s ruling socialist party, the Movement for Social Regeneration (MORENA).

One of the tribunal judges, Villafuerte Coello, denounced the accused clerics for encouraging Catholics “to pray and ask God to illuminate them when they vote,” in a video transmission of her statements during the proceedings.

“Of course that mustn’t be permitted,” said Cuello. “Votes aren’t celestial or spiritual things. This is about deciding votes with knowledge, with information, apart from pondering other things and this is just what must be respected, because celestial inspiration is not going to cause the best people to be in popularly elected positions. It’s logical.”

“Those who issued the messages are people who are expressly prohibited from doing so by the constitution, given their status as ministers of religious worship,” stated the tribunal in its written decision. “Therefore, because they have relevant influence over those who profess the Catholic faith, they were impeded from stating their position with respect to the elections, as well as from inciting people to vote in favor or against a political organization or candidate involved in the election.”

The primary target of the tribunal’s wrath was Cardinal Juan Sandoval Íñiguez, who was convicted both of interfering in a national election as well as violating the constitution’s separation of Church and state.

According to the court, Cardinal Juan Sandoval Íñiguez offended the constitution by stating, in a YouTube video of June 2 of this year, “There is much at stake in these elections. If those who are in power win, a dictatorship will come, that is, liberty will be lost, because we’re talking about a system that is communist, socialist, that enslaves. You just need to look at the countries that have fallen into it.” He also warned that the economy of Mexico would be “very damaged . . . we’re going to be very poor like Venezuela, like Cuba.”

Sandoval also expressed his concern that “the good of the family and of [human] life are at stake, because this government has adopted gender ideology, which brings with it all of the unnatural barbarities that they can unleash, which can impede and destroy the family,” as well as bringing about “abortion, express divorce, homosexuality, and homosexual marriage.” Also at stake was “religious liberty,” said the cardinal, because “the communist-Marxist system asks for it, demands it.”

To avoid these outcomes, Sandoval encouraged the “majority in Mexico that believes in God and in his providence, to pray much for Him to enlighten and help us,” to ask Our Lady of Guadalupe for her aid, and to pray in front of the Blessed Sacrament. He also encouraged Mexicans to “do their civic duty” and vote, and not “leave the field free to evildoers.”

Sandoval has refused to apologize for his statements and doubled down in early October, repeating his call not to vote for pro-abortion politicians.

Although Cardinal Aguiar Retes told the court that he did not intend to specify any political party, and noted that he had not made any statement about the elections in 2021, he was was convicted for statements he made in a public video message in 2018, which was re-published on Twitter in 2021.

“Today I want to give you a very clear message, to continue inviting the Catholic faithful to express our will by voting,” said Aguiar Retes several months prior to the elections that year. “Second, to vote in a rational way, investigating which candidate can govern us better, particularly which candidate can guarantee to us that the fundamental values of our faith, like the right to life, the right to a stable family, the right to education, the right to religious liberty, can be made a reality . . . Third, that we make our vote a completely free one, that we don’t allow ourselves to be influenced by polls.”

Among the convicted were also the Bishop of Cancún-Chetumal, Pedro Pablo Elizondo Cárdenas, and two priests: Fr. Ángel Espinosa de los Monteros Gómez Haro and Fr. Mario Ángel Flores Ramos. The latter is the former rector of the Pontifical University of Mexico.

Elizono Cárdenas named no party in his statements, only noting that “the Catholic Church has always condemned communism, because it is an atheist system, because it is a system that represses fundamental liberties,” and encouraged people to consider the effects of their votes on issues such as abortion, family values, and religious liberty.

Fr. Flores Ramos gave a long list of complaints about the existing government but without naming names nor political parties. Fr. Gómez Haro encouraged listeners to “ask God for the light to vote in a responsible way,” and asserted that “we never had such a bad government – not one vote, not one vote for irresponsible people, for the culture of death and division.”

Their case has now been passed to the country’s Secretariat of Governance to determine the penalty that will be applied. The Secretariat has the discretion to apply merely a warning or a fine up to the equivalent of 150,000 USD.”

The penalty for being a faithful Catholic. That’s really something, isn’t it? Who among us would be convicted of that? That’s a pretty good burnishment on the resume for Heaven, right?

As you approach Saint Peter just kinda’ drop all casual like that the Mexican government convicted you of standing up for life and God’s teaching about gender and sexuality. I know it’s probably pretty uncool to name drop at the pearly gates but if you were going to I’m just saying that would be a pretty good one.

Let’s be honest, America isn’t far behind on this type of thing. I’m thinking less than five years for sure.

I guess the question is that when you’re put on trial for being Catholic will there be enough evidence to convict?