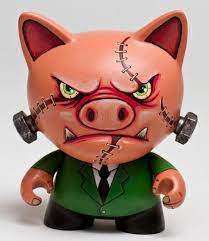 This isn’t unsettling at all.

Science Times: Chinese scientists from the Institute of Microbiology of the Chinese Academy of Sciences (IMCAS) announced the discovery of a scientific process that created humanized pigs where they could infect with the novel coronavirus and use it for research.

The Chinese Academy of Sciences is the world’s largest research institution of its kind, presenting their humanized pigs first in a study titled “Establishment of a Humanized Swine Model for COVID-19,” which was published in August in the journal Cell Discovery. It promoted genetically modified pigs with high similarities with the human body for COVID-19 research.

According to China’s state-run Global Times newspaper, researchers from IMCAS collaborated with scientists from Tsinghua University and China Agricultural University to develop two new models for COVID-19 infection. These models are the human distal lung organoids (hDLO) and the humanized pigs.

They noted that existing animal models, such as guinea pigs and some primates, used for simulation of COVID-19 infection could not fully capture the key characteristics of human physiology. That means research using these animal models only yields limited accuracy of tests on the efficacy and safety of vaccines and drugs used against COVID-19.

Researchers said that the two new models could show clinical features similar to actual COVID-19 infection in humans. Through these two models, they believe scientists will be able to make a more reliable and in-depth study of COVID-19 infection in the human body to develop a more precise therapy of vaccines and drugs.

Breitbart reported that the researchers attempted to use CRISPR gene-editing technology to remove the genes protecting the pigs from COVID-19. Pigs have healthy ACE2 receptors that do not bind with SARS-CoV-2. But scientists have removed some genes to make them more susceptible to the virus and infect the pigs.

The end goal of the experiment is to birth pigs that can be used as research models for COVID-19 research.

I thought we already had human/pig hybrids. They’re called Congress.

We must ask ourselves what are the limits? How many human cells change the definition of a pig? When does it become something other than a mere pig? What status must be afforded it at that point?

We could get to a point where these poor creatures communicate with humans. What then? Can they give consent?

Science unguided by morality is a race car without a steering wheel. We tread on dangerous ground and we have intentionally blinded ourselves.