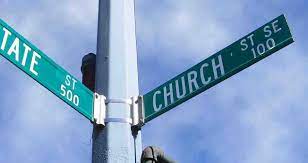 We now all know that The US Supreme Court denied an emergency application for relief in the case challenging New York’s vaccine mandate for healthcare workers. This case is of special interest in that it has no religious based exemptions.

Mind you, this is not an oversight. It is the intention.

Justices Thomas, Alito, and Gorsuch stood against the mandate but it was not enough. Roberts’ decision here should not be a surprise to anyone. Kavanaugh is becoming a constant concern. But Amy Coney Barrett’s decision is at best perplexing and at worst worrisome.

In his 14 page dissent Gorsuch wrote that the Governor exhibited a clear and obvious animus towards religion.

[T]he Governor answered that there is no “sanctioned religious exemption from any organized religion” and that organized religions are “encouraging the opposite.” Ibid. Apparently contemplating Catholics who object to receiving a vaccine, Governor Hochul added that “everybody from the Pope on down is encouraging people to get vaccinated.” Ibid.

Speaking to a different audience, the Governor elaborated: “How can you believe that God would give a vaccine that would cause you harm? That is not truth. Those are just lies out there on social media.”

“All of you, yes, I know you’re vaccinated, you’re the smart ones, but you know there’s people out there who aren’t listening to God and what God wants. You know who they are.”

Those are the statements of a madman. Oh, excuse me a madwoman or mad person.

Firstly, the freedom of conscience can not be limited to what the pope says. That is just stupidity and it just shows that she has absolutely no idea about how the Catholic Church works (or doesn’t work sometimes.) Just because the Pope says something doesn’t mean we all must believe it and live according to his every utterance. That is a child’s view of Catholicism. A stupid child at that.

On top of that she pretends to know the mind of God which sounds cult-leader-ish. And she’s saying that the smart people are listening to God and the dumb people aren’t.

This type of lunacy would put the power to point to the true religion as opposed to the fake religion in the hands of…a governor? This is the state endorsing a particular form of religion.

Do you feel the noose tightening yet?

You might recall Hillary Clinton once saying, “Far too many women are denied access to reproductive health care and safe childbirth, and laws don’t count for much if they’re not enforced. Rights have to exist in practice — not just on paper,” she said. “Laws have to be backed up with resources and political will…And deep-seated cultural codes, religious beliefs and structural biases have to be changed.”

You see, they decide what the smart religious beliefs are and they seek to change the faith. They expect you to follow along. Hey, you wanna’ be part of the smart set, don’t you?

The State began with a plan to exempt religious objectors from its vaccine mandate and only later changed course. Its regulatory impact statement offered no explanation for the about-face.At the same time, a new Governor whose assumption of office coincided with the change in policy admitted that the revised mandate “left off ” a religious exemption “intentionally.” The Governor offered an extraordinary explanation for the change too. She said that “God wants” people to be vaccinated—and that those who disagree are not listening to “organized religion” or “everybody from the Pope on down.” Then the new Governor went on to announce changes to the State’s unemployment scheme designed to single out for special disfavor healthcare workers who failed to comply with the revised mandate. This record gives rise to more than a “slight suspicion” that New York acted out of “animosity [toward] or distrust of ” unorthodox religious beliefs and practices. Id., at ___ (slip op., at 17). This record practically exudes suspicion of those who hold unpopular religious beliefs. That alone is sufficient to render the mandate unconstitutional as applied to these applicants. . . .

Rather than burden a religious exercise incidentally or unintentionally, by the Governor’s own admission the State “intentionally” targeted for disfavor those whose religious beliefs fail to accord with the teachings of “any organized religion” and “everybody from the Pope on down.” Even if one were to read the State’s actions as something other than signs of animus, they leave little doubt that the revised mandate was specifically directed at the applicants’ unorthodox religious beliefs and practices.

The Supreme Court’s unwillingness to stand up against clear animus towards religion is a shocking gunshot start of a race to curb religious liberty in this country. Every state in the union who wishes to do away with religious exemptions or conscience exemptions has to feel very good about the high court’s refusal to stand up for religious liberty.

As Justice Alito said in 2020, the test now is to see “whether our society will be inclusive enough to tolerate those with unpopular religious beliefs.”

Sadly, it would appear not.