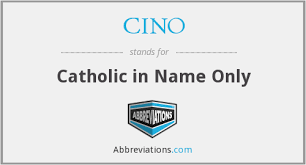 I despise how the school is still pretending that it will retain some measure of “Catholic identity.” This is a sham, of course. They will continue calling themselves something like “in the Benedictine Tradition.” And parents will keep sending their kids there as long as their kids keep getting into good colleges. Oh, and there will be some crosses on the walls. And a theology class or two. But make no mistake, Christ is being tossed aside by the Benet Academy.

Chicago Tribune: A Chicago-area religious order of monks said this week they are ending their affiliation with a DuPage County Catholic high school, which in recent months hired a woman in a same-sex marriage to coach the girls lacrosse team.

In a joint statement from Benet Academy Chancellor, Abbot Austin Murphy, OSB, and Benet Academy Board Chairman Dennis Flynn, officials said a “transition in the sponsorship of Benet Academy” is expected in the coming months.

“Events in recent months have been an occasion for the Benedictine monks of St. Procopius Abbey to examine their future relationship with Benet Academy,” officials said. “After much deliberation, the monks as a community have discerned that they no longer have the resources needed for governance and oversight of the Academy.”

While officials said “alternatives for the Academy’s governance are being studied,” for now, the Abbey will continue its role in the governance of the high school.

“The goal is that Benet Academy will continue to operate with an emphasis on academic excellence and Catholic identity within the Benedictine tradition,” officials said.

In an update to the Tuesday announcement, Benet Academy Head of School Stephen Marth said in a statement that “contrary to some reports circulating in the media earlier today, know of our steadfast commitment to ensuring that the Academy will maintain its Catholic identity, in the Benedictine tradition, for years to come.”