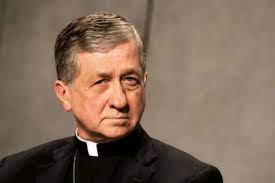 Nobody deserves this more.

Cardinal Cupich has done so much to undercut the Church’s teaching on life. And then even when he goes to the March for Life rally in Chicago, what does he do? He scolds the pro-lifers who are not wearing masks.

Approximately one minute into his speech, Cupich, who wore a mask at the outdoor rally, elicited a ripple of boos when he shared words of support for those he saw in the crowd wearing masks.

“You know, we come here in these days of the pandemic when life is threatened. And I’m so glad that I see many of you wearing masks. I hope that you continue to look for ways in which we can end this pandemic by promoting life. It’s really important to do that,” Cupich said.

I’m sorry. You just get the feeling Cardinal Cupich despises these people. Absolutely despises them.

And then when he heard the boos he pretended it was from people who didn’t respect the unborn as much as he does…because he’s such a champion of the unborn.

Hearing boos and shouting from some in the crowd, Cupich then added: “Now I know you people, there are some in the crowd here who don’t respect the unborn, and that’s too bad. But let me speak. Let me speak.” You can watch Cupich’s remarks in the March for Life Chicago live stream video, beginning at the 43:53 mark.

The booing and heckling subsided momentarily, but grew louder toward the end of Cupich’s remarks. Some in the crowd could be heard shouting statements about “Biden” and one man yelled, “Tell the USCCB!”

A disgusting tactic. He should be booed more often.