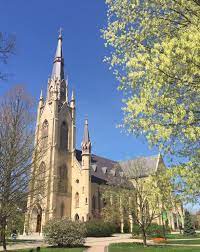 Well, this seems like a good idea. I guess, former coach Brian Kelly moved the Mass to Fridays in different buildings around campus. New coach Marcus Freeman decided to bring it back to the Basilica on Saturdays.

That seems like a good idea. Good for him. Good for Notre Dame.

ND Insider: What made such an impression on Marcus Freeman as an Ohio high school football recruit visiting Notre Dame two decades ago will officially return this fall.

At the request of the new Irish football coach, pregame Mass at the Basilica of the Sacred Heart will again be part of the team’s game-day ritual on home Saturdays. Freeman hinted strongly at his preference five weeks ago during a talk at the Mendoza College of Business, but Saturday he made it official.

“What I remembered from my recruiting trip is watching the players walk out of the Basilica on the way to the stadium,” Freeman said after spring practice No. 8. “I was a little bit caught by surprise when we didn’t do it last year when I got here (from Cincinnati).”…

“Hey, would we ever be able to have Mass on game days and walk from Mass to the stadium?” Freeman recalled asking Powlus.

Powlus told him that decision was up to the Irish football coach.

Instead of busing from the team hotel to the Guglielmino Athletics Complex on home game days, Notre Dame will head straight to the Basilica. The Victory Walk to Notre Dame Stadium will commence after what will be an optional Mass for the entire team — coaches, players and ostensibly support staff…

“I guess I didn’t know I was going to be the head coach,” Freeman said, “but it’s pretty cool as the head coach” to bring that back.

During his Mendoza talk on leadership on Feb. 25, Freeman was asked to name his favorite Notre Dame traditions. Despite arriving from Cincinnati only 13 months earlier, Freeman immediately cited trips to the Basilica and “coming out that ‘God, Country, Notre Dame’ door.”