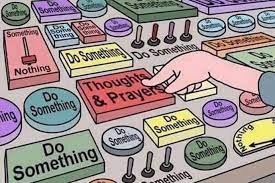 When belittling prayers is your go to move after tragedy, you’re probably prizing politics over people.

Included in the left’s mocking of “thoughts and prayers” is the assumption that prayers are useless and only legislation can truly solve the problem.

Anyway, the WaPo ran a cartoon following the tragedy in Texas that took so many children’s lives. They couldn’t help but attack pro-lifers.

You get it. Conservatives want to save babies in the womb but don’t care about children getting shot in schools.

The title of the cartoon is “Thoughts and Prayers, Again.”

Here’s the thing that they’re really not understanding. Many conservatives believe that leftist gun control policies make things more dangerous. How is the government going to stop guns from coming in across the border? The same way they stop drugs?

This entire thing is despicable. A national tragedy should bring us all closer together but instead we get mocking. We get division. We receive derision.

The lives of many families were torn apart yesterday. It is human to pray for them at the most horrible moment of their lives. It is inhuman to instantly turn their loss into a political gain. Shame on all of them.