Cardinal Zen offers Mass after his arrest, says ‘martyrdom is normal in our Church’ 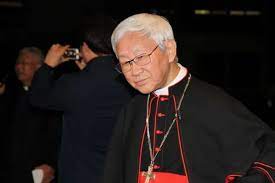 We are witnessing something special here, something heroic. Please keep Cardinal Zen in your prayers. This man has been rejected by so many who should’ve had his back, including the Vatican.

Cardinal Joseph Zen told Catholics in his homily during a Mass after his recent arrest that “Martyrdom is normal in our Church.”

On Tuesday at a Mass he offered in Hong Kong, Cardinal Zen prayed for the Chinese Catholics in mainland China facing persecution, Catholic News Agency reported.

“Martyrdom is normal in our Church,” the 90-year-old Zen said. “We may not have to do that, but we may have to bear some pain and steel ourselves for our loyalty to our faith.”

Zen celebrated Mass for about 300 people and also live-streamed the Mass on his Facebook page. The livestream received thousands of views in less than 24 hours.

The celebration of Mass closely followed Zen’s arrest by Hong Kong police on May 11, before he was released on bail some hours later. He was accused of “allegedly colluding with foreign forces” due to his role as a trustee of the 612 Humanitarian Relief Fund.

He especially prayed for “brothers and sisters who cannot attend the Mass in any form tonight — for they have no freedom now,” Reuters reported.

Citizens are undergoing the strictest lockdown worldwide as authorities in Shanghai and Beijing are confining them to their apartments. They are not allowed to leave for any reason, including Mass.

Restrictions on Catholics continue as minors are not permitted to attend public Masses in mainland China. After Cardinal Zen’s arrest, politicians and Catholic leaders alike condemned the act and called on the Vatican to reject its secretive deal with China.

Martyrdom is normal. That’s a pretty stark contrast to what we’re told by so many others in this world, including many Christian leaders. I’m not just talking about idiocy like the prosperity gospel but also those who forget that dying to self is what we’re called to do. Many tell us we’re supposed to “be ourselves” instead of who God intended us to be.

God bless Cardinal Zen and pray for his perseverance. Who knows how many souls are stirred by such faithfulness and courage?