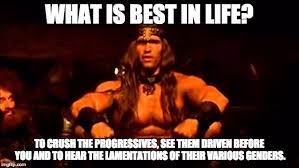 On top of being beautiful, she pissed off her college by talking about her religion, politics, critical race theory, COVID-19 regulations, and censorship. Let’s be honest, if she were anti-Christian, Democrat, pro-CRT, and double masking in fear of the dreaded lab made Wuhan lung AIDS, she’d be loved, respected, and admired by college administrators across the land. But she’s not any of those things.

So CMR is team Maggie. Total Team Maggie!!! There is the little issue of her pursuing a graduate degree in art therapy which makes us wonder about her ability to survive in a post apocalyptic world where people will survive based on their own survival skills. Let’s be honest, art therapy majors don’t have a high success rate in the post-apocalyptic world. But we’re overlooking her questionable taste in majors to support her in this time of crisis.

Maggie pissed off everyone at Southern Illinois University Edwardsville (SUIE). She pissed them off by expressing her Christian beliefs and political views so much that the university jumped ugly on her by issuing a “no contact” order to other students.

Maggie of the questionable major did not take this lying down. No. Maggie punched back. Maggie lawyered the f up. Go Maggie!!!

Guess what happened next? The school crapped itself. The administrators filled their DEPENDS, shifted uncomfortably in their chairs, and promptly backed down.

So Maggie forgave them and they all lived happily ever after? Heck no. Maggie and the Alliance Defending Freedom pushed on.

Maggie sought to make the horrible fates of SEIU administrators a warning to all around the globe. Maggie’s message was clear – Don’t mess with Jesus…or Maggie.

Maggie actually graduated with a degree in art therapy. Don’t laugh, it’s a real and valuable thing, you narrow-minded capitalists. But she also continued on with her lawsuit even after graduating.

It’s like I was saying -Don’t mess with Maggie.

According to the lawsuit, DeJong received the orders in February after at least three students complained about her views on religion, politics, critical race theory, COVID-19 regulations, and censorship. The lawsuit further states that DeJong was not given the opportunity to defend herself or was told which policy or rule she violated.

“This order is being issued upon information and belief that interactions between yourself and [redacted] would not be welcome or appropriate at this time,” one of the orders read. The orders also stated that any infringement could lead to further “disciplinary consequences.”

SIUE later rescinded the orders after receiving from ADF a letter that stated legal action would be taken if the orders were not lifted.

Speaking to Campus Reform in April, DeJong commented, “Because of these orders, I was unable to fully participate in my classes, go to certain locations on campus when the other students were present, and fully take part in the academic program. Students should not be bullied and intimidated because of their viewpoints, and I hope that the university will never let this happen again.”

Make them pay!!!! The only thing these people understand are money and power. If Christians do not push back with lawsuits they will continue with their anti-Christian policies.

We are all Maggies now (except probably less good looking but with better job prospects.)

(Before you go after me about making fun of art therapy majors, remember I was an English major so I’m even stupider.)