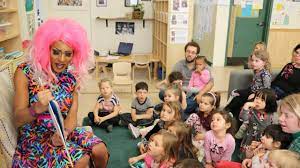 When I was a kid, if a man was holding a purse it was because his wife was in the changing room at the store.

Times are changing, I guess.

Now, Michigan’s first gay attorney general says there should be a ‘drag queen for every school.’

“A Michigan attorney general is facing criticism after she suggested that there should be “a drag queen for every school.”

Attorney General Dana Nessel made the comments during a civil rights summit in Lansing, Michigan, on Wednesday.

Nessel is the first openly gay person voted into statewide office in Michigan.

“Drag queens make everything better. Drag queens are fun,” she is quoted as saying by Detroit News reporter Craig Mauger.

“A drag queen for every school,” she reportedly added. Mauger went on to tweet that Nessel admitted her comment had not been poll-tested.”

Catholic schools and homeschooling is looking a lot better right now, isn’t it?