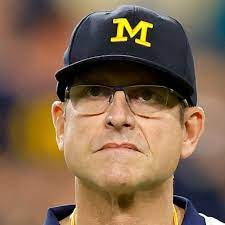 Michigan football coach Jim Harbaugh spoke out clearly on the issue of life in the wake of the overturning of Roe. The left predictably freaked out.

Sports Illustrated: (Jim) Harbaugh and his wife, Sarah, spoke at the Plymouth Right to Life event, which raises money for pro-life charities in the state of Michigan.

“In God’s plan, each unborn human truly has a future filled with potential, talent, dreams and love,” Harbaugh said, via Detroit Catholic.

“I have living proof in my family, my children, and the many thousands that I’ve coached that the unborn are amazing gifts from God to make this world a better place. To me, the right choice is to have the courage to let the unborn be born.”

The abortion debate kicked into high gear in recent weeks after the U.S. Supreme Court struck down the former Roe v. Wade ruling, which guaranteed a federal right to abortion since 1973.

By overturning that case, the Court ruled that individual states have the right to legislate abortion for themselves, not at the national level.

The ruling was met with passionate reaction on both sides of the argument, with pro-life groups celebrating it, and pro-choice groups condemning the decision.

“I recognize one’s personal thinking regarding morality of a particular action may differ from their thinking on whether government should make that action illegal,” Harbaugh said.

“There are many things one may hold to be immoral, but the government appropriately allows because of some greater good or personal or constitutional right.

“Ultimately, I don’t believe that is the case with abortion. Yes, there are conflicts between the legitimate rights of the mother and the rights of the unborn child. One resolution might involve incredible hardship for the mother, family, and society. Another results in the death of an unborn person.”

In no uncertain terms, many on the left made it clear that this is not acceptable.

This might be a difficult concept for Jim Harbaugh of any anti-choice person to grasp … but if you don’t want an abortion, just don’t get one. Not that hard.

Allie Beth Stuckey responded to Jemele brilliantly by saying, “According to this totally rock solid logic, there should be no laws against anything. If we don’t like something(assault, murder, theft, etc), we just shouldn’t do it and not worry about what anyone else does.”

Another on twitter asked Jemele if her logic also applied to the right to bear arms.

Jim Harbaugh at a Right to Life dinner: "I love life. I believe in having a loving care & respect for life & death. My faith & my science are what drives these beliefs in me."

Jim, you're welcome to your own beliefs–but not your own science or *pushing your beliefs* on others.

This Michigan professor is um…not happy.

Harbaugh previously implied that Covid was punishment for abortion. His position is not credible.

And – newspapers – stop calling them "pro-life." Until they're anti-gun and pro-health care, they're just Theocrats imposing their bullshit religion on others. https://t.co/49h8Dz7TKb pic.twitter.com/ODDe6nPVHX

Kudos to Jim Harbaugh. The guy’s got guts. He knows what Michigan is. He knows that every time he opens his mouth to defend life and speak of his Catholic faith it unsettles the ground beneath him. God bless him for his bravery.