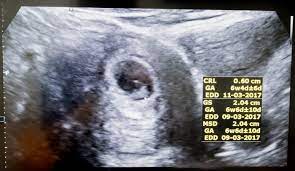 I want to say this is so insane that only Stacey Abrams could believe it. But then Glenn Kessler “THE Washington Post’s FACT CHECKER” agreed with her. And they’re basing this on some wacky statement from an abortionist on NPR.

Georgia Democrat Stacey Abrams: "There is no such thing as a heartbeat at six weeks. It is a manufactured sound designed to convince people that men have the right to take control of a woman's body."

Wait. I thought we were supposed to #trustthescience. I guess, except when it detects life in the womb, huh?

This is horrible. It’s insane but be assured that this is the new ground to where the abortion debate is shifting. They will simply deny the science. They can’t admit that they’re killing actual human beings with heartbeats so they’re going to keep pretending despite all the evidence that they’re not killing a human being.

Stacey Abrams was mocked for saying such a blatantly untrue statement but then the Washington Post’s FACT CHECKER agreed with her. Glenn Kessler, pictured below, called the fetal heartbeat “a misnomer.”

Hey, if you can’t trust that face, am I right?

FWIW, "fetal heartbeat" is a misnomer. The ultrasound picks up electrical activity generated by an embryo. The so-called "heartbeat" sound you hear is created by the ultrasound. Not until 10 weeks can the opening and closing of cardiac valves be detected by a Doppler machine. … https://t.co/OODSeeFMas

He says first that the “so-called” fetal heartbeat is “electrical activity generated by an embryo.” But then he says the sound you hear is “created by the ultrasound.”

And this activity generated by the embryo would it be originating from the heart area?

And that is completely false. https://t.co/6tF51VIspW

According to Fox News, Dr. Nisha Verma, a self-identified abortion provider, told NPR, “The flickering that we’re seeing on the ultrasound that early in the development of the pregnancy is actually electrical activity, and the sound that you ‘hear’ is actually manufactured by the ultrasound machine.”

Dude, even Planned Parenthood says Abrams, Kessler, and the wacky abortionist are wrong:

Please be assured that Planned Parenthood will soon 86 that information.

In a world when nothing means anything, everything means nothing. They will twist words and meaning into what works for them politically because there is no truth. There is only what works politically.