This is Horrifying. 70 Pro-Life Centers Vandalized or Torched. Zero Arrests. 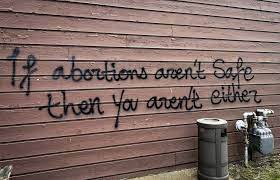 Yes, pro-lifers are being targeted. Not just by those firebombing their clinics, or tossing rocks through their windows but by law enforcement agencies and the intelligence community which is supposed to be investigating these crimes.

This is a must watch:

Rev. James Harden is the CEO of a pro-life pregnancy center that was firebombed by radical leftists. He tells Tucker that he gave the FBI security footage of the act, they took it, have made no arrests, and refuse to give it back because it could "inspire right-wing terrorism." pic.twitter.com/kf6P6cXyf0

Here’s the thing about agencies like the FBI. I hear people keep insisting that its a few bad apples at the top. But very few agents are quitting over these outrageous things that keep happening. If you protest against what the agency is doing and then quit, maybe then after Republicans gain power they’ll consider you for the FBI. But if you just allowed these awful things to occur and never raised your voice then this country no longer has need of your services.

This country is no longer “We the people.” It is THEM vs us.

And just about half the country seems pretty cool with this. I’m not. The deep state has weaponized the intelligence apparatus of this country on pro-lifers and conservatives. I don’t see how this country comes back from this. I really don’t.

This is going to get worse because I honestly don’t see how the deep state and the intelligence community allow Republicans to regain power. Big Tech too. They know that if Republicans gain power, they may lose their ability to discriminate against conservatives. Many in the FBI may face charges.

They can’t allow this to happen. They won’t. So, if you’re looking for a fair elections in our near future you can forget about it. They simply can’t allow it to happen.

Pray that you and yours have the faith and courage to stand up to this thuggery.