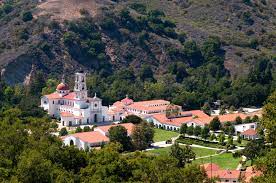 I guess this was originally written by Claire Anderson for the College Fix and then reproduced in The Ohio Star:

A small Catholic college with locations in California and Massachusetts continues to produce priests, nuns and other religious vocations year after year.

Around 10 percent of Thomas Aquinas College alumni enter priesthood or religious life, according to Christopher Weinkopf, communications director for the 500 student school. This summer, Augustine Wilmeth (pictured above) became the 80th alumnus priest. Five years prior, the college reached 71 alumni priests, meaning it has had nine more priests ordained in five years.

Religious life could include joining an order such as the Dominicans, Franciscans or Benedictines and living as a nun or religious brother.

The College Fix’s former cartoonist Pat Cross, now with the Norbertines, is among those alumni pursuing the priesthood. Three of his fellow Aquinas grads joined him this year.

“The deep spiritual life of the College — which includes four Masses a day plus a curriculum ordered to theology — surely plays a role in helping students discern their vocations, as many of our alumni attest,” Weinkopf told The Fix via email.

Students also have ready access to spiritual direction to help them with their discernment.

“We also have full time chaplains on both campuses who serve as role models for our students and provide spiritual direction,” Weinkopf noted. “The College additionally regularly hosts various vocations talks from dioceses and religious orders.”

The late president of the college, Thomas Dillon, cited the classical curriculum as one source of formation. The college offers only one degree, based on the “Great Books.”

He wrote that “theology is given pride of place in our curriculum, and all the disciplines we study are ordered to it.”

Students in “theology tutorials” are required to “ study the Scriptures…the original works of the great Fathers and Doctors of the Church, and…the writings of St. Augustine and St. Thomas Aquinas.”

The college also has an “institutional bias toward the priesthood and religious life,” according to Dillon.

“Moreover, as president of the College, I have made it a point to attend, whenever possible, the ordinations of our alumni priests,” the late president wrote. “It is edifying indeed to witness the anointing with oil and solemn laying on of hands, and words fall short in conveying the tremendous pride and gratitude I have each time I receive the Holy Eucharist from the hands of a former student.”

It’s great to see this going on. It’s actually amazing how few of the “Great Books” most young people are assigned to read. I’ve pushed my kids to read them. Some do. Some don’t.

I think the great books keep your head on more eternal things, not the day to day scrolling of Tik Tok.

God bless faithful Catholic colleges. I spend a great deal of time ranting about terrible colleges that shouldn’t call themselves Catholic at all so I should also take time to praise those who do it well.