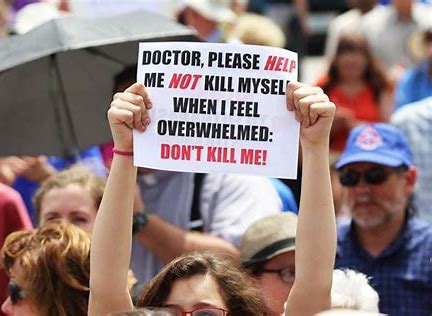 Demonic. How else to describe this?

This is what passes for sympathy and kindness nowadays. For years we’ve been told that abortion is the kindest act for a baby that might not lead a “perfect life.” So now, it turns out that death may be the best thing for those suffering from mental illness.

For the left there’s nothing that can’t be solved through death. And death is always the “compassionate” response to any world problem.

When Medical Assistance in Dying (MAID) first started in Canada was supposed to be rare and only for those who were suffering terribly from a fatal disease. Slippery slopers argued that this would be expanded but they were laughed out of the room. Oh, you silly people worried that people will be pushed into death. Hahahaaa!!!

But be assured, they will rise compassionately. And when the numbers get embarrassingly high, they will just say numbers are no longer available.

The date whispers in Julie Leblanc’s mind when she is feeling most hopeless. It tugs at her thoughts when, for days, she forgets to eat, or doesn’t shower. She thinks about it more than she knows she should.

On March 17, assisted dying will become legal for Canadians with a mental disorder as their sole condition, and Ms. Leblanc can apply.

She has been struggling with mental illness since she was 8 years old. At 13, she was prescribed her first trial of anti-depressants; now at 31, she has tried too many medications to count, and spent much of her life either in therapy or waiting on a list to receive it. Bounced between doctors, she has been given multiple diagnoses – depression, anxiety, post-traumatic stress disorder, borderline personality disorder.

She wavers between wanting to die and trying to live, especially for her 11-year-old son who is cared for by her parents. She tries to feel hopeful about the earnest new psychiatrist, her third in a year, who patiently listened to her at their first appointment in September. But she is tired of retelling her story. It never seems to help. She feels trapped in despair and anxiety, while carrying the deepest sorrow of all – her illness prevents her from being a good mother to her son.

She has tried taking her own life before. But she worries now about suicide being painful, or ending up in a wheelchair, which happened to someone she knows. She has researched medical assistance in dying online. MAID sounds peaceful, she says. And also too tempting. How can it be, she wonders, that the same system meant to keep her alive might soon help her die?

When that option arrives in March, Canada will have one of the most liberal euthanasia laws in the world, joining only a few other countries that allow assisted dying for mental illness.

It will be the most controversial expansion of MAID since a Supreme Court ruling led the federal government to legalize euthanasia in 2016. At that time, MAID was only for patients with a foreseeable death, but Parliament – with Bill C-7 – removed that requirement in 2021.

The original version of the bill did not allow assisted death for patients with mental disorders as a sole condition because, the government said at the time, there were outstanding questions about how illnesses such as depression could be safely included, and what the future implications might be. The Senate disagreed, removing that exclusion before the bill passed, but with one caveat: Parliament would study the issue for two years before any of those patients could receive MAID.

With four months to go, there is still no consensus in the mental health community – and, in fact, doctors remain deeply divided. There are no finalized national standards, no transparent review process in place to watch for mistakes, and hospitals are still figuring out how they would implement the change.

Toronto’s Centre for Addiction and Mental Health (CAMH), Canada’s largest psychiatric teaching hospital, has said that assisted dying shouldn’t expand without more study. And the Canadian Mental Heath Association has raised serious concerns about expanding MAID without first increasing mental health care funding. In Quebec, after public consultations, a legislative committee has recommended against the province expanding MAID to mental illness at all.