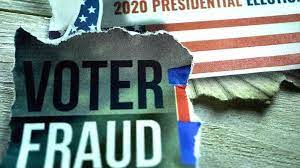 Wait. I was told this never happens.

NY Post: A Staten island grand jury has identified numerous instances of ballot harvesting fraud in a race for City Council last year — including a ballot submitted on behalf of a dead person and signature fraud involving dozens of other absentee ballots.

The unprecedented 38-page grand jury report released by Staten Island District Attorney Michael McMahon called for changes in state election law including requiring official government-issued ID to vote. But it does not specify the race in question, nor does it file criminal charges against anyone.

Sources told The Post that the criminal investigation focused on the campaign of Marko Kepi, who narrowly lost a GOP primary race to Mid-Island Councilman David Carr.

“This case is the poster child for the necessity of voter ID laws. Unfortunately, the real victims here are the hundreds of residents whose identities and votes were stolen. And this will happen again until our state Legislature takes election integrity and security seriously,” said Carr.

The Post previously reported about accusations of ballot harvesting and other fraud allegedly committed by the Kepi campaign, including registering a dead man to vote for him — as a female.

It’s pretty predictable that they’re going after a Republican for voter fraud but I don’t even care about that. We are constantly assured that ballot harvesting doesn’t happen and that the election is totally secure and we’re crazy for even suspecting otherwise.

But then the same people who say it never happens then go ahead and prosecute a Republican for doing it. They can’t help themselves.

This would seem like a solid start. So, I’m on board. Let’s stop those eeeeeevil Republicans from cheating. Let’s demand id from voters and ban ballot harvesting. Let’s go.

NO? You guys aren’t down with that? Why not? Hmmmmm…