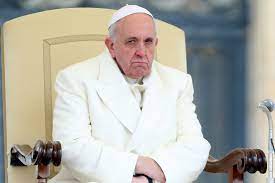 Wow. We’ve got Archbishop Ganswein’s book coming out shortly and now we have word that Cardinal Pell had written secretly about how he believed Pope Francis has been a “disaster” and a “catastrophe” for the Church.

Man, the Catholic blogosphere ain’t boring, is it? In all honesty, I don’t think he’s saying anything that many many many Catholics already believe but it’s interesting to hear it from someone on the inside. We’ve received a lot of silence from inside the Vatican. The Dubia was never even responded to and what happened? Nothing.

So Catholics who are truly concerned about the Church can start feeling a little alone out there. But Caridnal Pell knew more about the Vatican than anyone else and hearing him talk about the Francis’ papacy in such terms is good.

God bless Cardinal Pell. Do I wish he would’ve come out and said these things publicly? Yes. But is there anyone out there who thinks Cardinal Pell didn’t give enough. The man spent over a year in solitary confinement on trumped up ridiculous charges? Why? Quite likely for attempting to clean up the Vatican.

I hope and pray his words embolden other priests, archbishops, and cardinals to speak out.

But Pell, a staunch conservative, grew increasingly disillusioned with the direction of Francis’ papacy, including its emphasis on inclusion and canvassing of the laity about the future of the church.

He penned a remarkable memorandum outlining his concerns, and recommendations for the next pope in a future conclave, that began circulating last spring and was published under a pseudonym, “Demos,” on Vatican blog Settimo Cielo.

The blogger Sandro Magister on Wednesday revealed that Pell indeed was the author of the memo, which is an extraordinary indictment of the current pontificate by a onetime close collaborator of Francis.

The memo is divided into two parts — “The Vatican Today” and “The Next Conclave” — and lists a series of points covering everything from Francis’ “weakened” preaching of the Gospel to the precariousness of the Holy See’s finances and the “lack of respect for the law” in the city-state, including in the current financial corruption trial underway that Pell himself had championed.

“Commentators of every school, if for different reasons … agree that this pontificate is a disaster in many or most respects; a catastrophe,” Pell wrote.

Also Wednesday, the conservative magazine The Spectator published what it said was a signed article that Pell wrote in the days before he died. In the article, Pell described as a “toxic nightmare” Francis’ two-year canvassing of the Catholic laity about issues such as church teaching on sexuality and the role of women that is expected to come to a head at a meeting of bishops in October.

Referring to the Vatican’s summary of the canvassing effort, Pell complained of a “deepening confusion, the attack on traditional morals and the insertion into the dialogue of neo-Marxist jargon about exclusion, alienation, identity, marginalization, the voiceless, LGBTQ as well as the displacement of Christian notions of forgiveness, sin, sacrifice, healing, redemption.”

Pell’s anonymous memo, however, is even harsher and takes particular aim at Francis himself. While other conservatives have criticized Francis’ crackdown on traditionalists and mercy-over-morals priorities, Pell went further and devoted an entire section to the pope’s involvement in a big financial fraud investigation that has resulted in the prosecution of 10 people, including Pell’s onetime nemesis, Cardinal Angelo Becciu.