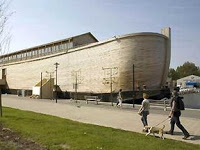 The Ordinary Ministers of the Media just cannot help themselves. It is the AP this time.

There I was, minding my own business, innocently reading a nice story about a gentleman who built a replica of Noah’s Ark in Holland.

Johan Huibers built this replica of the ark to function as a museum in order to promote his belief in the Bible and the story of Noah. He and his son built it by hand over the course of two years. It contains life-size models of giraffes, elephants, lions, crocodiles, zebras, bison and other animals as well as a 50 seat theater that shows the Noah segment of Disney’s Fantasia. Great stuff!

There I was, enjoying this nice story and then out of nowhere “BAM!,BAM!BAM!“

Lois Poppema, visiting from California, said she thought the Netherlands was exactly the right place for an ark.

“Just a few weeks ago we saw Al Gore on television .. saying that all Holland will be flooded” due to rising sea levels, she said.

“I don’t think the man who made this ever expected that global warning [sic] will become (such an important) issue — and suddenly having the ark would be meaningful in the middle of Holland.” [See it is meaningful because of global warming, not because of Mr. Huibers faith.]

What in Heaven’s name does Al Gore and global warming have to so with this story?!? Absolutely nothing is the correct answer. If you thought that maybe the creator of the ark replica mentioned it, nope:

Under sunny clear skies Saturday, Huibers said he wasn’t worried about another biblical flood, since according to Genesis, the rainbow is the sign of God’s promise never to flood the world again.

Clearly this is something the AP reporter just brought up so they could insert it into the story. Making the news, not reporting it. These guys just cannot help themselves. Where are the editors that are supposed to weed this stuff out? I feel like I have been the victim of an agenda driven drive-by.