A Moment of Silence for Muslim Mickey Mouse 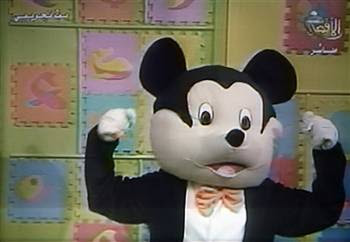 I was thinking of seeing Ratatouille this weekend with the kids but this might be good too. In the last episode of a weekly children’s show featuring “Farfour,” a Mickey Mouse look-alike, the large rodent was beaten to death by an actor posing as an Israeli official trying to buy Farfour’s land. Farfour’s dying gasps included calling the Israeli a “terrorist.”

The mouse that roared made worldwide headlines for preaching Islamic domination and armed struggle to youngsters was broadcast yesterday. “Farfour was martyred while defending his land,” said Sara, the teen presenter. He was killed “by the killers of children,” she added.

The kids should be fine after seeing something like this but I think I’ll stick to Ratatouille.