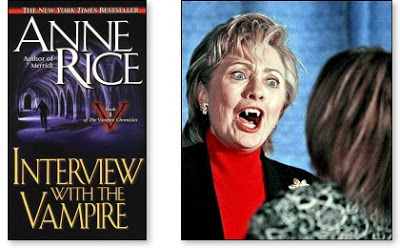 Anne Rice, the Gothic writer, is now famous for her re-conversion to Catholicism. She wrote a book about Jesus Christ and promises to do more. And she is now endorsing Hillary Clinton on her website and saying abortion is bad but should remain legal.

She said her “Christian conscience” requires her to endorse of Hillary Clinton and Roe V. Wade based on the separation of church and state.

I want to add here that I am Pro-Life. I believe in the sanctity of the life of the unborn. Deeply respecting those who disagree with me, I feel that if we are to find a solution to the horror of abortion, it will be through the Democratic Party.

I have heard many anti-abortion statements made by people who are not Democrats, but many of these statements do not strike me as constructive or convincing. I feel we can stop the horror of abortion. But I do not feel it can be done by rolling back Roe vs. Wade, or packing the Supreme Court with judges committed to doing this. As a student of history, I do not think that Americans will give up the legal right to abortion. Should Roe vs Wade be rolled back, Americans will pass other laws to support abortion, or they will find ways to have abortions using new legal and medical terms.

And much as I am horrified by abortion, I am not sure — as a student of history – that Americans should give up the right to abortion.

I think this might just be the new way of things. Don’t be sheepish about it. Rice boldly says the Gospels tell us to vote Democrat.

This cancer of pro-life Catholics is a shame to us all. I’m a little tired of saying we can all agree that abortion is evil but must be kept legal because there are people who believe otherwise. Is unanimous consent the guardian of our rights? Not according to the Declaration of Independence which states, “We hold these truths to be self-evident, that all men are created equal, that they are endowed by their Creator with certain unalienable Rights, that among these are Life, Liberty and the pursuit of Happiness.”

Presidential candidate Rudy Giuliani, oddly enough, agrees with Rice but probably not with whom she endorsed.