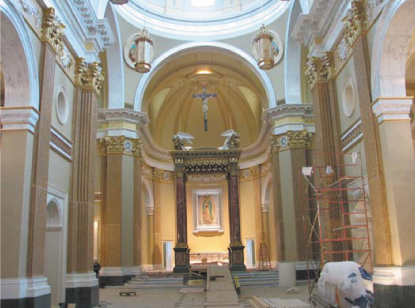 Architect Duncan Stroik sent some pictures today from the rapidly moving completion of the great Shrine of Our Lady of Guadalupe in LaCrosse, Wisconsin (click on thumbnails for larger images). The building is set to be dedicated on July 31st, 2008 though it should be finished a month or so before that. If anyone is still in the “it just can’t be done any more” school of beautiful liturgical art and architecture, this will gently nudge them out of it. The building See Related Story.
Springfield Cathedral Update
——Wreckovation Update: This is mediocre ineptitude, and architect Joseph McCarthy’s building deserves better.partakes of a recognizable language of classical architecture, with its great baldachino framing the mosaic of Our Lady of Guadalupe on the rear wall behind in much the same way that the baldachino of St. Peter’s Basilica in Rome frames the great Chair of Peter. Of particular interest is the level of design and craft found in the baldachino itself, where a coffered dome forms the underside of the canopy. It has been many decades indeed since something this sophisticated has been built in the United States. In the architecture of the new springtime, this building proves that not only has the ground warmed, but the seeds are sprouting and coming to flower.