Obama’s Face in a Potato 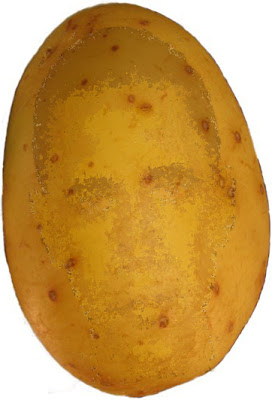 “Don’t Eat that Spud, Ma!” That’s how it all started as 17 year old Earl Jr. looked down at his mother’s plate at the “Eat ’til You Can’t No More” Diner. What he saw surprised him and he shouted out to his mother. “There’s a dude on your ‘tater.”

So when Jamie Lynn Dixon looked down at the potato she noticed that staring back at her was the visage of a man. And not just any man.

Right off, three of the waitresses up and fainted at the mere mention of Obama’s name.

The Dixon family brought the potato home with them. Within hours the miraculous potato had inspired a line twice around the Dixon’s double wide trailer.

“And this isn’t just some regular potato”, swears Jamie Lynn. “No matter where I go in the room Barack’s staring at me,” she said. “This is one very special potato.”

In fact, many of the neighbors said the Potatobama cured Fred Parker’s rheumatism, as well as cured all the effects of Earl Jr.’s paint-sniffing debacle last week.

Jamie Lynn says she dreamed last night of Obama speaking to her. In her dream she said Obama simply keeps repeating the word “change” to her. “I ask him what it means and he just keeps on saying that word over and over again,” she said. “Earl Sr. thinks he might be talking about my menopause but I think it’s more spiritual than that.”

But the next morning she turned on the television and saw Obama saying “change” over and over in an interview no matter what the question was. “That’s got to be a sign,” said Jamie Lynn. “For that man to put his face on my dinner means that he must have some kind of secret spirit power,” she said.

“Some people are saying Obama might be the Second Coming. I don’t know. Maybe it’s just the first coming of Obama,” said Earl Sr.

None of the Dixons’ have voted in any of the past eight elections but promise that this time they’ll vote for Obama. They’re also considering selling the Potatobama on Ebay.