Barack Obama has resigned his 20 year membership in the Trinity United Church of Christ in Chicago in the aftermath of inflammatory remarks by his longtime pastor the Rev. Jeremiah Wright and more recent fiery remarks at the church by another minister, the Rev. Michael Pfleger.

Your intrepid Creative Minority Reporters have an exclusive report on which Church Barack Obama will join next. In addition, CMR has exclusively obtained critical notes that reveal the inner most thoughts that went into the choice of a new Church for the charismatic presidential candidate.

After conducting a Watergate-style break-in at Obama headquarters, CMR can now reveal the notes that Barack Obama made on a yellow legal pad during his decision making process. 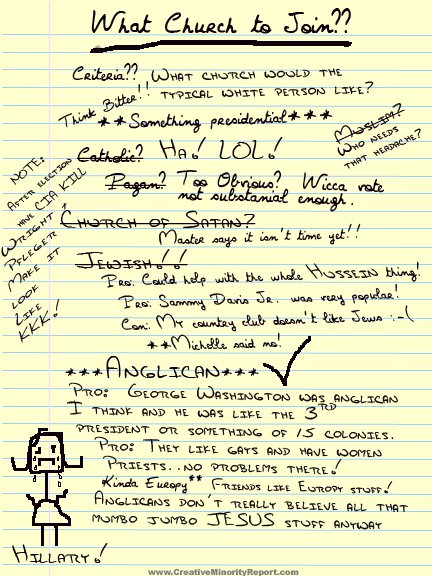 There you have it. Barack Hussein Obama will become an Anglican!