The Last Place On Earth 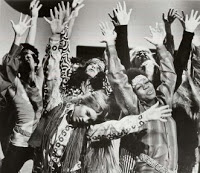 I can guarantee that the last place on earth that you will find me August 5-8 at this … this… horror show. I can say with all sincerity that I would rather pull my toe nails out while listening to the soundtrack of Rush Hour II.

[Tidings] Musicians, liturgists, clergy and parish ministry leaders will gather at the August 5-8 for the convention, whose theme is “One Body, One Spirit In Christ.” Other presenters include Tom Kendzia, Mary Frances Reza, Dr. Paul Ford, Christopher Walker, Jerry Galipeau and ValLimar Jansen.

The convention will offer speakers and break out sessions on a wide range of topics, with special emphasis on worship in a multi-cultural church, and the care and renewal of those in parish ministry leadership. Activities during the convention will highlight the diversity of styles and cultures present in today’s church and will include concerts, liturgies and special events intended to build bridges between the cultures and focus on unity in Christ. [Multi-cultural-diversity-bridge building. Oh, that sounds like fun!]

Msgr. Irwin is a world-renowned author, educator, speaker in the field of theology and liturgy. He holds an S.T.D degree from Ateneo of Anselmo, Rome, and is currently the Dean, School of Theology and Religious Studies at The Catholic University of America. [A Clip from Msgr. Irwin: “While some Catholics worry about “getting the rubrics right” in celebration of the liturgy, Msgr. Irwin said the ultimate purpose of the spirituality of liturgy is to live life more fully. “The ultimate purpose is not to get the rubrics right,” he said, “it’s about that you and I get life right — to experience the Eucharist and experience daily life more fully.”

He is not necessarily wrong of course, rubrics are a means not an end, but I think it hints at were he is coming from. There is more: “Many changes have been instituted in Catholic worship since the Second Vatican Council Msgr. Irwin said. One of the most noticeable changes has been participation in the liturgy by the assembly. “Before Vatican II people were passive, they watched what the priest did,” he said. “Then they went to the Communion rail, knelt and received Communion.” Referring to the Cosmic Mass…”

Dear Msgr, believe it or not people participated in the mass before Vatican II. The same ol’ tired misinterpretation of Active Participation. Yawn. Further, I don’t know about you but I don’t trust anyone who uses the word cosmic in conversation. Do you?]

He has published nearly a dozen books published on liturgy, most recently “Models of the Eucharist” (Paulist Press, 2005), and has collaborated in the authorship of many other books and publications.

Sister Serjak is a pastoral musicians and author of several books including “Prophecies and Puzzles: A Seven-Day Retreat for Those in Music Ministry and Cosmic Dance,” in addition to a soon-to-be published guide for daily Mass. [Cosmic again? Oh no! That cannot be good. What is with these people?] She currently works with women who are entering the Sisters of Mercy.

[Rawn] Harbor, one of the preeminent African American Catholic liturgists and musicians in the U.S., serves as an adjunct faculty member and director of liturgy and music at the Franciscan School of Theology in Berkeley, and adjunct faculty and director of the gospel choir at the University of San Francisco. He holds a Master’s degree in theological studies from the Graduate Theological Union in Berkeley.

Honestly, can you think of a worse way to spend a few nice August days that sitting through this disaster in the making?