Do you remember back in 2000 when we were going into the debates. Al Gore, the smartest man alive, was supposed to wipe the floor with red-neck moron from Texas who doesn’t even know how to pronounce nuclear. But as we remember, reality was much different. Bush held his own in all three debates and was widely considered to have won two of them hands down.

Al Gore behaved like a robot trained to act like a man by another robot. He was stiff and way over-coached. Problem was, Gore didn’t have enough confidence in himself to act like Al Gore. George Bush, on the other hand, acted just like George Bush. At the time, people liked that about him.

As long as I live, I don’t think I will ever forget the moment when Bush rose from his seat to answer a question. As he began to give his answer Al Gore rose from his seat and took three quick steps toward Bush. Clearly, Gore had been coached to invade Bush’s space to try and throw him off. But the way Gore did it was rather bizarre. Rather than throw Bush off his game, it played to his strengths. Bush paused, looked Gore up and down and then proceeded to give him a smile and a nod as if to say “I don’t care if you are Vice-President, you take one more step and you will regret it!” Priceless. I have thought since then that Gore lost the election in that moment.

So that brings up to this election. Since then, and probably even before then, the democrats have gone out of their way to lower expectations for the debates. Republicans do it too, it is just part of the perception game that must be played.

But I am rather struck by it this time around since they are now trying to turn Mr. Eloquence, Mr. Inspiration, The One we have been waiting for into Forrest Gump. The Anchoress writes about the absolute flurry of stories by the Mass Media wing of the Obama campaign.

It seems that the Obama camp has decided to go play the Forrest Gump card with Senator Obama; “I’m not a smart mayun…” 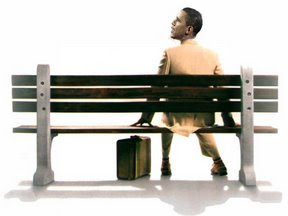 Suddenly, there are a flurry of news articles – really, a flurry – come out as if by decree, or it’s just one of those astonishing co-incidences, like when news anchores and pundits all start using the same word; “gravitas,” “paradigm,” “mayor of a small town.” This time the decree (or the big co-incidence) is meant to lower expectations for Obama as he prepares to debate John McCain: Obama is not a stellar debater. Obama, “Mr. Eloquence”, whose Invesco field speech was called “symphonic” by some pundits is very evenly matched against John McCain. John McCain has scored all the advantages for the upcoming debate. Obama may have to provoke McCain to anger in order to win! Obama is an uneven debater. And, Obama camps seeks to lower expectations.

Get that meme out there, fix that narration; tell the nation that Obama is only a so-so debater, and then – if he is mediocre – it is a win. If he is better than mediocre, well, then John McCain must be an absolute dunce, because everyone knows Obama is not much of a debater. 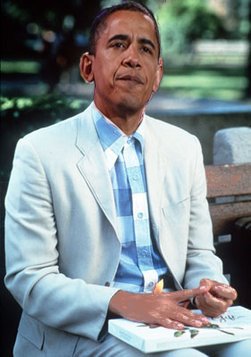 Get that, the greatest uh uh Orator of uh uh our time, is not uh a good debater. Exactly what is Obama good at then? He has told us that his primary executive experience is running his own campaign. Turns out, his running mate doesn’t think he is particular good at that either. Biden had this to say about the Obama ad ridiculing McCain for not using a computer which blew up in The One’s face.

[NRO]Couric: And you guys haven’t been completely guilt-free, making fun of John McCain’s inability to use a computer.

Biden: I thought that was terrible, by the way.

Couric: Why’d you do it then?

Biden: I didn’t know we did it, if I’d have known we did we’d have never done it, I don’t think Barack, you know, I just think that was, ah

Couric: Did Barack Obama approve that ad? He said he did, right?

Biden: Yeah, the answer is, I don’t, I don’t think anything was intentional about that, they were trying to make another point.

So maybe the media is right this time. Maybe Obama really is Forrest Gump.