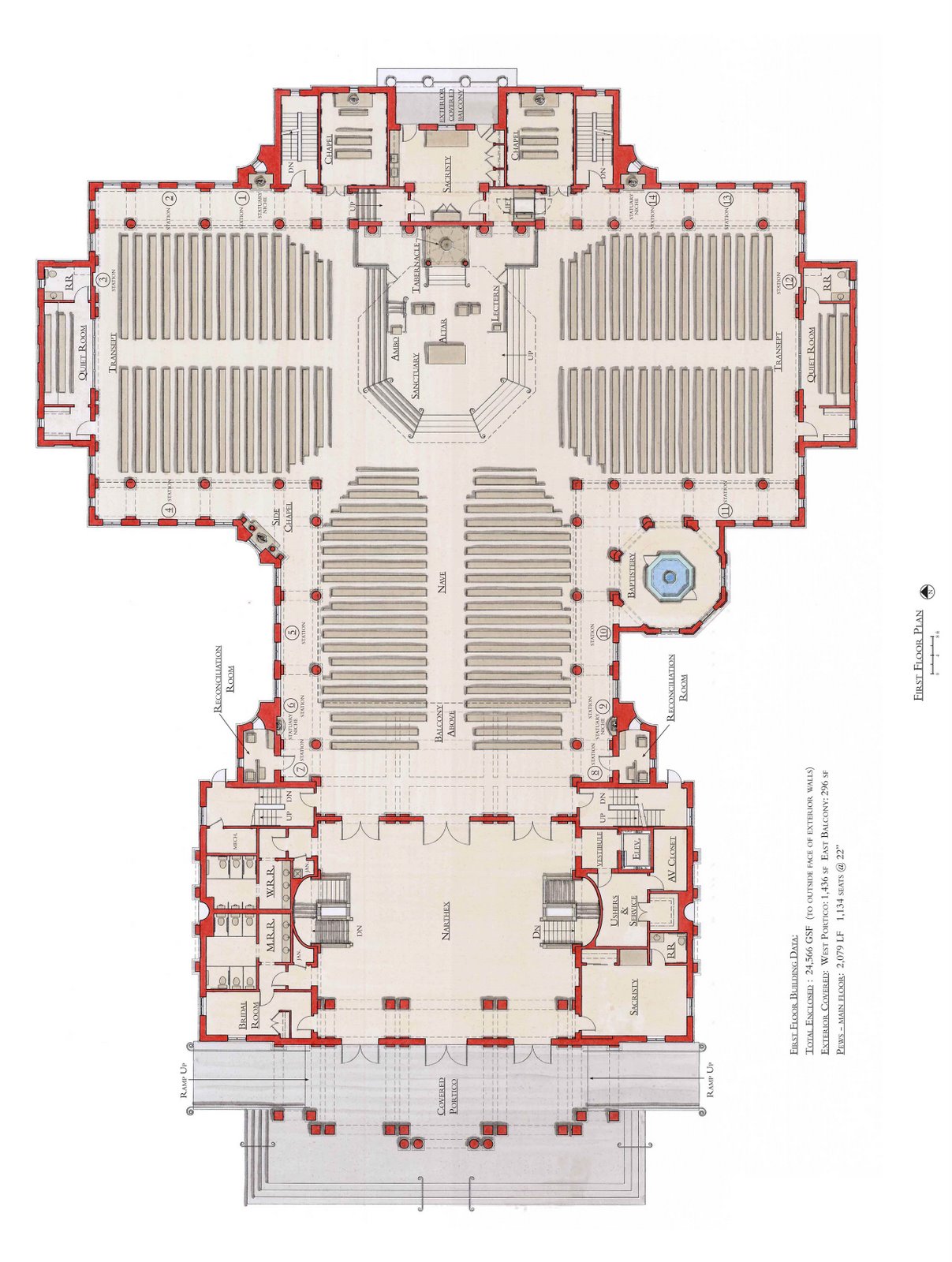 Yesterday’s post showed some images of the exterior of the new St. Michael the Archangel Church in Kansas City, and today we take a look at the interior. The new building by design architect David Meleca was planned to combine some the needs of today’s parish and advances in liturgical understanding which came about in the 20th century with a deep sacramental and architectural tradition.

St. Michael’s is a big church, though the scale of the parts tends to hide that fact: it seats nearly 1100 on the floor. Though no one would argue that genuine participation in the sacred liturgy is possible even in the 100th row of the pews, the pastoral decision was made to use the Greek cross as the starting point for the plan. It preserved to notion of the building forming the congregation into the shape of Christ crucified while at the same time allowing for a clear central aisle and relative proximity to the altar and sanctuary. Seating on three sides in this case was a given, but every effort was made to preserve two things: first, the sense of a sanctuary as a reserved place, and second, an eschatological orientation for the entire interior. [Eschatology refers to the last things, or the end of time when Christ’s reign has come and the world has been completely transformed by grace.] Therefore the whole building would be imbued with the notion of being a sacrament of the Heavenly Jerusalem.
The interior design was planned with these ideas in mind. The sanctuary, while stepping forward, is floored with patterned marble (covered in this image with paper during construction) and has a golden rail which gives a sense of enclosure and limits access to only a few points. (Interestingly, speakers will be placed invisibly in the posts of the rail). The deep blue of the ceiling paint is meant to evoke the celestial skies above the heavenly Jerusalem, while the paint color for the walls speaks of both the Tuscan/Italian motif of the entire church as well as the golden walls of heaven. The altar, when installed, will be made of gem-like colored marbles in reds and greens, making it (along with the ambo and baptistery) the most dense spots of rich color in the room, evoking the notion of the radiant, transfigured table of the Wedding Feast of the Lamb. Further emphasizing the eschatological orientation of the church is the text placed around the entire interior in the frieze of the first floor entablature. A gold-leafed text of one of the canticles of the Book of Revelation surrounds the entire congregation, sacramentally enveloping them with the praise of God as uttered in heaven, with which earthly worshippers add their voice.
The large triumphal arch motif in the rear of the sanctuary takes the architectural tradition established by the Arch of Constantine, with a large central opening flanked by two smaller ones. The triumphal arch marked a ceremonial entry of a victorious emperor into the city of Rome, and this notion was captured at this new church by marking a victorious entry of the Christian from the nave, to the sanctuary and to the Father through Christ. [Or it could be read as Christ’s triumphant Second Coming where the victory of sin and death has been completely applied]. A large mural, the subject of the next post, will be placed in the center arch, showing Christ reigning on the throne in heaven as described in the Book of Revelation. So the longstanding notion of sanctuary as meeting place of heaven and earth is rightly maintained. Furthermore, the privileged place of the sanctuary is indicated by the finish of the columns in a deep red marble color.

The exterior rendering of the church shows the prominent octagonal baptistery. While it has been the trend in recent years to absorb the baptistery into the body of the church, often in the rear of the central aisle, Archbishop Naumann of Kansas City, when reviewing the plans, suggested it be placed on the south side of the crossing. The baptistery as freestanding building dates back to the early Christian centuries, where the unbaptized were seen as not yet “citizens” of the Church, and therefore were baptized in a separate building. The octagonal shape spoke of the “8th day” of creation, that is, the day after God rested, referring to a glorious eternity. While the baptistery appears small compared to the rest of the church, its interior is nearly 18 feet across and over 20 feet high. This is no ecclesiastical afterthought, but rather a significant chapel worthy of the notion of becoming a child of God in baptism. The underside of the baptistery dome has been covered in a mural by EverGreene studios of New York showing the starry skies of the heaven down from which comes the Holy Spirit in the form of a dove. The Spirit is surrounded by water-like rays indicating the “river of the water of life” mentioned in the Book of Revelation as the grace of the Spirit transforming the world, just as the one baptized is transformed in this very church. Though the dove remains dominant, the Trinity is implied by the use of the red cross indicating the Son and the rays of golden glory behind which indicate the Father. Important to note here is that the stars are not simply a gold-leaf pattern the five-pointed type taken from the American flag, but rather are designed as glorious stars, suggesting the fulfillment of their very starriness at the end of time.

More to come on the great mural…