Church Architecture Before and After 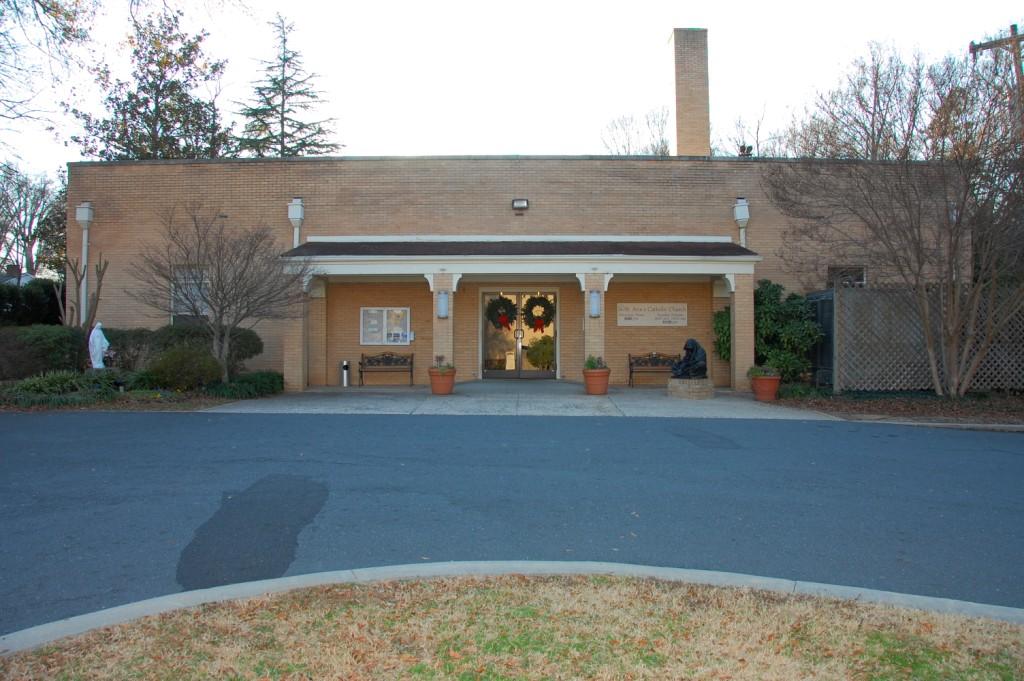 St. Ann Church in Charlotte, NC has a very interesting building history, mostly dominated by the fact that the upper church was never built. For over 40 years, the people of this parish have been worshiping in the basement which was supposed to be temporary, and the floor of the upper church simply has served as the roof of the church for decades. This is how it has looked all these years:

This is the rear entrance of the original basement, built into a hill, serving as the main entrance to the church. The flat roof line above is where the west end of the church floor would have been, and the front facade of the church (the narthex only) was built on the other end but there was no church behind it. This was the interior for many years:

Through a long time of prayer discernment, the pastor, Father Timothy Reid, decided that even though his budget was tiny (only $2.75 million) he would reestablish the church’s connection with traditional architecture. Some people weren’t happy about this. But with strong pastoral leadership, he hired architect James McCrery, and turned the church entrance into this:

It is a bit severe, but this was due to the limitations of the budget, not lack of desire or design skill. The climate of Charlotte tolerates the stucco exterior fairly well. The projecting wing on the right houses an adoration chapel, and the triple arched entry evokes the triumphal arches of the ancient world indicating the victory of Christ.

The interior was transformed as well:

Much greater height was given to the interior (which was a challenge because of the weight of the roof and somewhat inadequate foundations). The pulpit is an 1820s salvaged antique, the upper windows were also purchased from a closed church. The lower windows come from the original church. The altar is newly designed by the architect with a mosaic inlay. An altar rail was included (not yet installed in the photos below) so that the building may be used properly with the Extraordinary Form, but the rail is very transparent and open. The arcade of columns in the sanctuary uses the Ionic Order, the column which represents motherly women, as appropriate for St. Ann, mother of the Virgin Mary. There are plans, as finances allow, to further enrich the rear wall of the sanctuary with murals. The location of the tabernacle is also temporary in the photos below.

This project provides a great lesson: strong pastoral leadership and a good architect can make something great even on a small budget.

Here is a video made by the church about the construction. Enjoy!