Live From Lockerbie Its Beyonce! 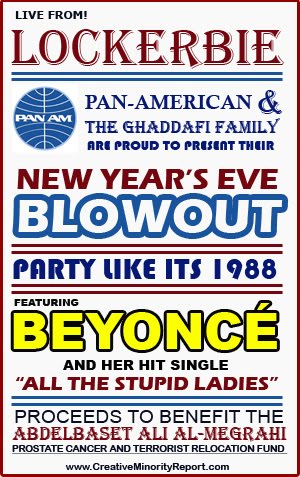 There are certain things you shouldn’t do no matter how much money they are paying you.

Beyoncé Knowles performed for an hour on New Year’s Eve at a party thrown by Libyan leader Colonel Gaddafi’s son, Hannibal on the island of St. Barts.

The multiple Grammy award-winning star, 28, performed five songs at the Nikki Beach club on the Caribbean island of St. Barts, it has been revealed.

Her choice to do the gig is an affront to all that have perished at the hands of the Gaddafi’s, in particular the families of the Lockerbie victims.

Beyoncé, her agent, and everyone else involved should know better and should be ashamed of themselves. To add injury to insult, Hannibal put his wife in the hospital by breaking her nose.

I am very disappointed in Beyoncé and she should prompltly apologize and donate the proceeds to a worthy and related charity.