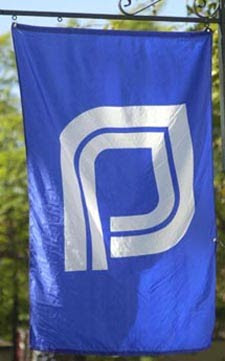 This is sad. The Santa Barbara Downtown administration is proudly flying the flag of death on their streets this week. The main street of the California town has been lined with Planned Parenthood’s flag to honor the organization and drum up its donations.

The flags of Planned Parenthood of Santa Barbara, Ventura and San Luis Obispo Counties, Inc will fly on State Street from January 12th through the 22nd to coincide with the 36th anniversary of Roe v. Wade, the 1973 U.S. Supreme Court decision guaranteeing protections for women’s reproductive health, safety and privacy.

Planned Parenthood of Santa Barbara, Ventura and San Luis Obispo Counties
has been providing high-quality, low-cost reproductive healthcare services to the tricounties since 1964. Last year, the organization served 30,000 patients for over 61,000 medical visits at their five health centers.

They commend the organization for promoting “honest communication between young people and parents, medically-accurate sex education in our communities, and access to affordable birth control and believes these are the real solutions to preventing teen pregnancy and reducing the spread of sexually transmitted infections.”

Honest communication? Have they seen any of the Lila Rose videos where Planned Parenthood continually flouts the law and lies to teens about the life growing in their womb. (Remember heart tones anyone?)

Oddly, the folks in charge of the flags being on the street failed to mention abortion even though abortion is the way Planned Parenthood makes its money. Millions of human beings have perished in Planned Parenthood clinics and Santa Barbara flies their flag proudly as a way to increase donations for them?

Also, I’m not going to fail to point out that Planned Parenthood was founded by stone cold racist Margaret Sanger (“Eugenics is … the most adequate and thorough avenue to the solution of racial, political and social problems”) and just last year agreed to take donations earmarked to reduce numbers of blacks in America.

But their racist past is overlooked by Santa Barbara, I guess, because of their willingness to kill babies in the womb.

Let’s be clear – Planned Parenthood is a business that sells death. Their flag is testimony to our degraded culture. Sad.

(Thanks to Matthew Martinez for the story.)