Signs Of The Apocalypse: Special Edition 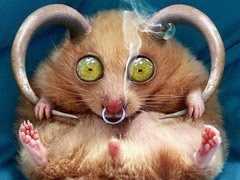 News sources are reporting that “in what seemed designed as a display of advancing missile technology, Iran said on Wednesday that it had test-fired a rocket into space carrying living organisms — a rat, two turtles and worms, according to the official Press TV broadcaster.

This could be bad news in that Iran gaining nuclear and missile technology should have us changing our pants. But this is actually much much worse.

Remember like twenty years ago there was the big scare that kids were flushing baby pet alligators down the toilet and these baby gators were returning ten years later from the sewers super large and really hungry and a little hurt by callous humanity.

Remember the movie Cannibalistic Humanoid Underground Dwellers? Well that occured from just a little old radioactive garbage somebody flushed. Well with all the weird stuff going on in space, what do you think’s going to happen when this rat, two turtles and worms come back in like a hundred years. Huh?

Truly I ask you. How can a world, so bereft of original thought, long survive?

This is just bad…

A man reportedly bit off an officer’s nipple during a fight outside a Chicago bar on Monday night.

The Chicago Sun-Times says the man got into a physical confrontation with the off-duty officer and bit the officer’s nipple.

A doctor said the bite was so severe, the officer “lost a body part”, according to the Chicago Sun-Times.

A Chinese man who trained monkeys martial arts to entertain shoppers was shocked when they turned the tables on him.

Lo Wung’s taekwondo monkeys have become a regular feature outside a shopping centre in Enshi, Hubei province, where they were trained to show off their martial arts skills on each other.

But one quick-thinking monkey saw his chance when Lo slipped – and caught him with a perfect flying kung fu kick to the head. The rest then joined in the affray.

Of course they did. Nothing says apocalypse like highly trained Kung-Fu Monkeys. Jeez, didn’t this guy ever watch Charlton Heston?

LONDON – Agents for Britain’s MI5 intelligence service have discovered that Muslim doctors trained at some of Britain’s leading teaching hospitals have returned to their own countries to fit surgical implants filled with explosives, according to a report from Joseph Farah’s G2 Bulletin.

If fake breasts start exploding, there is going to be glitter everywhere!! Oh the humanity…

An animal rights group is calling on keepers of the country’s most famous groundhog to replace Punxsutawney Phil with a robot. PETA says it’s unfair to subject the creature to the bright lights and huge crowds that mark this Feb. 2 tradition. Organizers of the festival say Phil is fine — living better than other groundhogs in his climate-controlled environment.

If he sees his shadow, you’re all dead.