Whats Rocco Got That We Don’t Got? 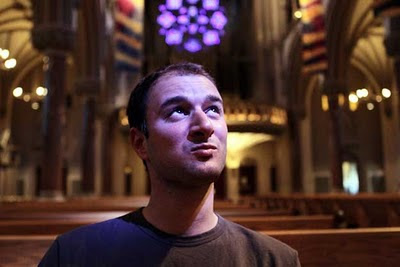 Seriously, we are doing something wrong.

Matt and I are like the Rodney Dangerfield’s of Catholic blogging. Nobody is offering us honorary degrees. This all just goes to prove my theory that the value of ‘stupid’ is misundervalued in our society. Or something.

But Rocco, Rocco gets his props.

All four will coalesce Friday as the 27-year-old blogger, who lives in and works from his parents’ home in Philadelphia, receives an honorary doctorate from the Aquinas Institute of Theology in St. Louis. His parents will be there as Palmo gives the commencement address to the seminary’s 77 graduates. He’ll also watch his beloved Phillies take on the Cardinals this week.

“Rocco has shown that someone with his background — a Christian commitment, but also his abilities and background in journalism — can use the blogosphere in a very powerful way in terms of communicating the message of the church,” said the Rev. Richard Peddicord, president of the Aquinas Institute.

Aquinas has never awarded an honorary degree to a journalist, and the only other journalist who has given Aquinas’ commencement address was Peter Steinfels of The New York Times in 1993.

In awarding Palmo an honorary doctorate, the 84-year-old Dominican seminary is making a statement about the changing relationship between journalism and the Catholic church. The award for Palmo’s work on his blog Whispers in the Loggia is also an expression of how American Catholic leaders hope to encourage a younger generation to engage their faith through news.

Congrats to Rocco. But seriously, what Rocco got that we don’t got? Besides all the sources and connections and friends. Besides all that stuff, what huh?

But we got something that Rocco doesn’t have and when I think of it I will be sure to let you know.