Quotes Side by Side: Is Less More? 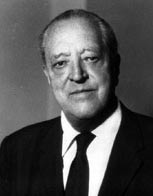 “The man who said that ‘less is more’ is also saying that nothing is the most.” — Edward Schulte, American Catholic church architect, in “Quotations,” a paper read before the Cincinnati Literary Club, 1968, recently discovered in his personal papers.