Anti-Octopism is All the Rage Now 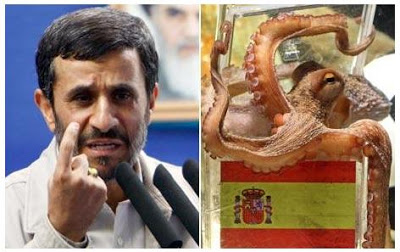 Mahmoud Ahmadinejad, the Iranian leader, says Paul the Octopus…is a symbol of all that is wrong with the western world.

However, the Iranian president accused the octopus of spreading “western propaganda and superstition.” Paul was mentioned by Mr Ahmadinejad on various occasions during a speech in Tehran at the weekend.

Immediately after Ahmadinejad’s anti-octopus speech,
Michael moore came out and sided with Ahmadinejad saying the octopus was at fault for instigating such a reaction from adherents of the religion of peace.

Oliver Stone said the problem wasn’t just that one particular octopus. “It’s all octopi,” he said. Stone claimed that the real story of what’s going on between Ahmadinejad and the octopi can’t be heard because the media is filled with octopi and octopi sympathizers. “Oh yeah,” he added, “The octopus lobby in Congress is controlled by evil octopi too.”

The Obama administration announced their promise to work for peace between the octopi and the Iranian leader but Obama did take time out of his vacation to criticize how the octopi were goading the Arab world into a reaction with their incessant sports predictions and…well, just existing.

An administration spokesperson said they might remove the octopus from the endangered species list because the United States didn’t want to be seen as taking one side over another.

A spokesperson for the octopi said that they simply want to be left in peace in the sea, which is their homeland. That comment caused further outrage in the Arab world because they felt the sea didn’t belong to the octopi but to the Muslim world.

Helen Thomas said she wants all octopi removed from the ocean and rounded up and placed in tanks. But she said she wanted to make it clear she wasn’t anti-octopus.

Reportedly, Code Pink has already started buying harpoons, nets and clubs which they are bringing into the Middle East by flotilla to ensure peace.