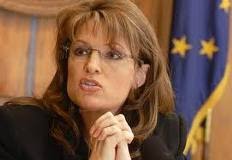 Critics of Sarah Palin are riotous, loud and angry but I’ve noticed that their criticisms vary so wildly that it sometimes seems impossible they’re talking about the same woman.

On one hand you have the criticism that she’s a backwoods rube, a real idiot who is in so far over her head that she’s a danger to the entire country.

On the other hand you have the belief that she’s an evil genius who is singlehandedly reviving long dead Nazism and mainstreaming it into “Tea Party” conservatism and she’s therefore a danger to the entire country.

Aaron Sorkin, of “West Wing” fame and the writer of “The Social Network” movie had this exchange with Kathleen Parker on the new Parker/Spitzer show.

Sarah Palin’s an idiot. Come on. This is a remarkably, stunningly, jaw-droppingly incompetent and mean woman.

Parker jumped in: “Wow. What do you base that on, the meanness part?”

I love how Palin’s stupidity goes unquestioned by Parker. Parker only questions the meanness. (That, sadly, is what passes for a conservative on CNN.)

But what they can’t explain with their idiocy explanation is how Sarah Palin has become the biggest boomiest voice of the conservative movement who influences elections via Facebook and Twitter in a way nobody else can.

No other conservative did better than Palin in effectively opposing Obamacare and they know it. Her title of “Death panels” caught on and became a rallying point against the administration’s plans.

So effective is she that the Huffington Post worried:

Palin is poisonous to the body politic because she brilliantly creates the illusion that she is the girl next door running for the White House on behalf of common people.

Mediaite opened a story on Palin saying it was “further proof that Sarah Palin is some sort of political, media genius.”

Newbusters reported on a CBS story that she was an abusive wife who threw food cans at her husband. But it gets better. It turns out that Palin is not just angry with Todd. But she’s mad at the entire country and is plotting her revenge on the country that didn’t vote her into the White House. Muuhahahahahahah!!!!!

Gross continued, alleging that Palin “tortured” former assistants, one of whom “had to quit the job, seek psychiatric counseling, and leave the state to escape Palin’s influence.” He asserted: “…[Palin] exacts retribution on people after they leave. They’re afraid that she’s going to get them fired from their job, try to ruin their reputations. That’s the modus operandi.” Earlier in the interview, he described Palin’s current political activity as an effort to exact “a kind of vengeance on the country for rejecting her” in the 2008 election.

Sarah Palin is seeking vengeance on America? That’s truly what this clown was saying and the mainstream media gave him time.

What Palin has done is remarkable. How many of us thought she was absolutely irrevocably finished in politics when she resigned from being Governor? Show of hands? I know I did. I liked her, was rooting for her to do well, but I thought she was done.

But since that day when everyone in the media wanted to inscribe the gravestone of Palin’s political career, she has made herself into the Party’s kingmaker who swings elections with a few words on the internet. Her ability to raise funds is unparalleled in the party as well.

The reason why? It’s because people trust her. What she says she means. Agree or disagree with her, Sarah Palin is not a creation of media savvy consultants. She is blazing a new path that consultants don’t know about because it hasn’t been tried before. Sarah doesn’t really do prepared remarks. Her political path is to stay the least the road less taken.

And the reason the left fears her is because she is nothing they’ve ever seen before. She has become the paramount figure of the conservative movement. She did it without the media. She doesn’t do a lot of mainstream media interviews and has taken her case directly to the people–and she’s winning. That scares both the media and the left. (Is that redundant?) So they call her a dunce, a rube, a cheating wife, an abusive spouse, a neglectful mother, an evil genius who hates America, a jingoistic patriot, and some more evil genius.

But while Palin’s critics differ on so many things they all agree on one thing–Sarah Palin must be stopped. But they don’t have any idea how to do it. And that scares them.